The sun shone brightly on the Class of 1997

Louis V. Gerstner Jr., chairman and CEO of IBM and a former chief executive of RJR Nabisco, Inc., delivered the Commencement address and was one of six honorary degree recipients. 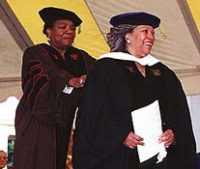 Faculty retiring from the Reynolda Campus are:

Retiring from the Hawthorne campus are: