‘Success is something that happens through us,’ columnist Brooks tells graduates. 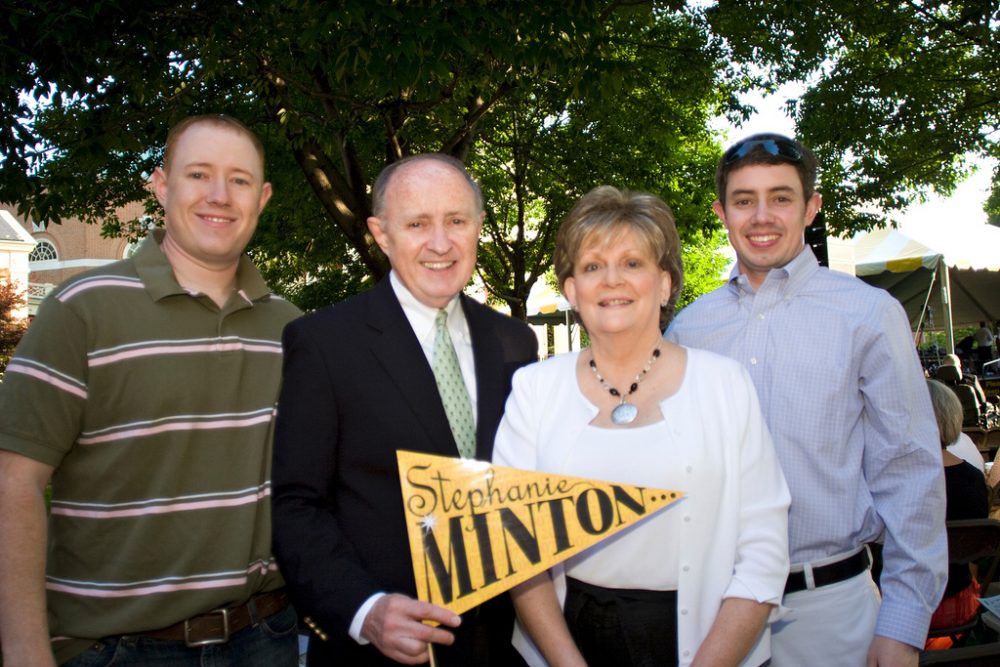 Richard and Carole Minton, parents of graduate Stephanie Minton, and her brothers.

The Minton family from Connecticut knows how to do graduations. Two hours before the 9 a.m. start of Wake Forest’s 2007 Commencement on Hearn Plaza, the family members of soon-to-be-graduate Stephanie Minton had already claimed four rows of seats — marked off by black-and-gold triangle-shaped signs with her name on them — near the stage in front of Wait Chapel.

Richard and Carole Minton, parents of graduate Stephanie Minton, and her brothers.

“This is our (family’s) 15th graduation since University of Virginia in 1983, but the first time here and the most southerly school we’ve been to,” said her father, Richard Minton, leading a group that included Stephanie’s mother, Carole, three brothers and thirty other assorted cousins, aunts and uncles and grandparents, ranging in age from 3 to 84, from six states. “She’s the last of the cousins to graduate so now we’re passing the baton on to the next generation.”

Family members had bottles of water with specially printed labels with trivia questions about Stephanie or Wake Forest printed on them. On a bus tour of Winston-Salem Sunday afternoon, they sported matching t-shirts printed with the names of colleges and the graduation dates of family members who’ve graduated in the last 24 years. “She’s loved it here,” Richard Minton, sporting a green tie with tiny Demon Deacons on it, said of his daughter’s experiences. “Most of our family went to school in the northeast, but she wanted to be more independent.”

Stephanie Minton, a business major, plans to work for a consulting firm in Washington, D.C. She was among approximately 900 undergraduates and more than 600 graduate and professional school students to receive diplomas on a picture-perfect day under cloud-free skies and with temperatures that started out in the low 70s but grew hotter by the time the ceremony ended just after noon.

“We inherit, starting even before we are born, a great river of knowledge, a great flow from many ages and many sources,” he said. We’re formed by genes and religion and culture and family and “the information (that) you absorbed over the past few years at Wake Forest (that) we call education,” he said. “But it is all information, and it flows from the deep past through us into the future…. We exist as creatures within this hidden river of knowledge the way a trout exists in a stream or a river. We are formed by the river. It is the medium in which we live and the guide about how to live.”

He encouraged graduates to “create an entourage of heroes” and remember the examples set by great leaders and their parents and others who have come before them as they navigate the river of knowledge. “They will remind you of your place in the hidden river of wisdom. They’ll serve as models. They’ll give you an honest perspective on how you’re doing. They’ll remind you that your blessings don’t come from you but from those who came before you.”

Brooks and five others received honorary degrees during the program: The Rev. J. Bryan Hehir, a noted Catholic priest and a professor at Harvard University, who delivered the Baccalaureate address on May 20; former U.S. Senator Dale Bumpers of Arkansas, who delivered the address at the School of Law’s hooding ceremony; Wolfgang Schutz, president of the Medical University of Vienna, who delivered the remarks at the School of Medicine’s hooding ceremony; Harold L. Martin Sr., senior vice president for academic affairs at the University of North Carolina; and Anne Firor Scott, a pioneering scholar of women’s history and professor emerita at Duke University.

Retiring faculty members from the Reynolda Campus and the Bowman Gray Campus also were recognized. In his remarks, President Nathan O. Hatch encouraged graduates to be wary of the allure of success. “It is a siren song that lures you to believe that a person’s worth is based strictly on your achievement, that success is the measure of all. I trust that your education at Wake Forest reinforced a different message … that your value and meaning in life is worth infinitely more than whatever credentials, promotions and bonuses come your way.”

Graduates and their families filled some 12,000 chairs — 2,000 more than last year — that stretched from the yellow-and white-striped tent in front of Wait Chapel back toward Reynolda Hall at the other end of Hearn Plaza. It was the 50th anniversary of the first Commencement held on the “new” campus since Wake Forest moved to Winston-Salem in 1956, although Commencement wasn’t held on the Quad for the first time until 1966.

Thirty minutes before the ceremony began, Chris Hood, a philosophy major from Charlotte, and Kunal Gupta, an economics major from Hagerstown, Md., were adjusting the tassels on their caps as they lined up in the parking lot between Poteat and Kitchin residence halls. “It’s hard to believe it’s here,” said Hood, who plans to attend law school at Campbell University in the fall. “It seems like I just got here.”

“It’s a very sentimental moment,” added Gupta, who plans to look for a job in Washington or New York. “The four years went by very quickly. It’s sad that I may never see some of these students again. But it’s time to move on to greater things.”

On the other side of Hearn Plaza, lining up between Davis and Taylor residence halls, Nichole Burnap, posing for photographs with friends Barbara Jackson and Ryan Huff, wasn’t ready to go yet. “It’s been amazing, I wish I had another four more years,” said Burnap, a finance major from Mesa City, Ariz. “It’s so pretty here, why would you ever want to leave.” Burnap won’t be leaving just yet; she’ll be back in the fall to complete her master’s degree in accountancy from the Calloway School and will be back in the same spot a year from now, picking up her second Wake Forest degree. 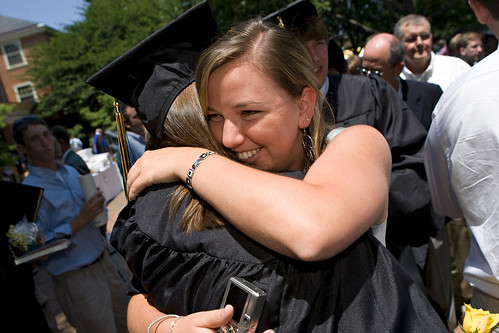 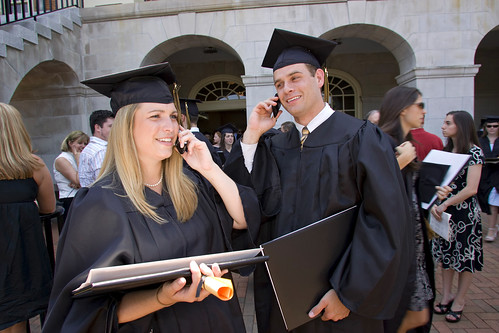 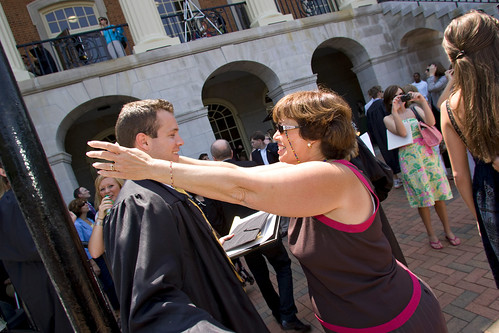 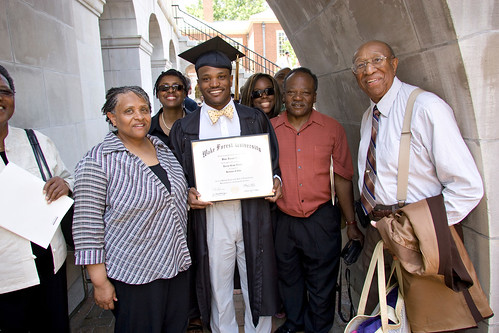 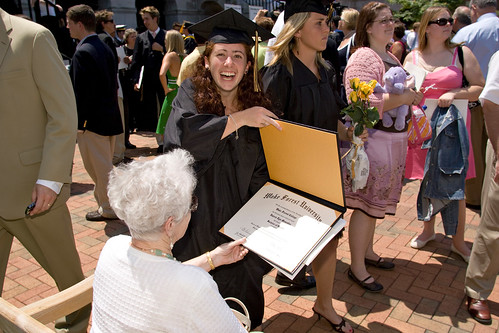 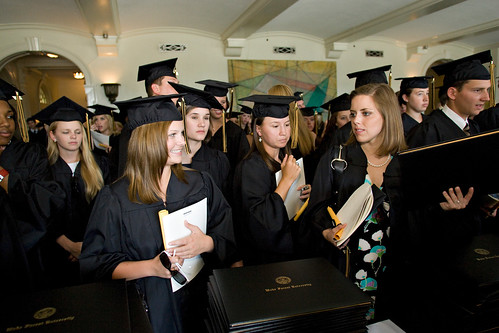 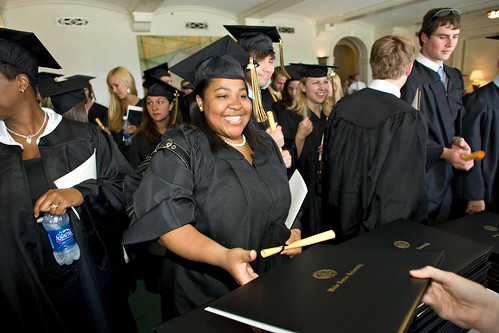 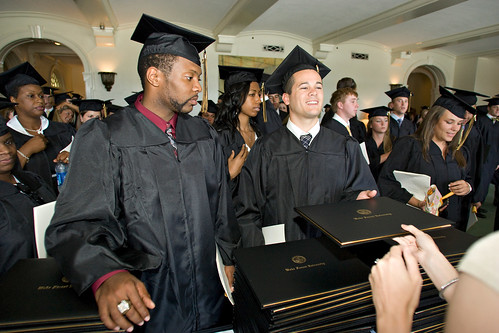