Commencement 1998 was an event to appreciate

White House Chief of Staff Erskine Bowles advised 1998 graduates to show gratitude in his address at Commencement on May 18. “You simply can’t say thanks too much,” said Bowles, as he spoke to the 822 undergraduates and 571 graduate and professional schools students who received degrees at this year’s ceremony. “Gain a reputation for appreciating the work of others.” Bowles also charged graduates to “add to the woodpile” by finding their own way to make the world a better place. 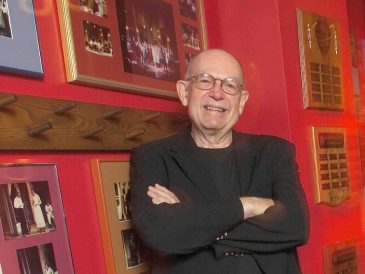 Harold Tedford in the foyer of the Main Stage Theatre in Scales Fine Arts Center in 2004.

Faculty retiring from the Reynolda Campus are:

Retiring from the Bowman Gray campus are: