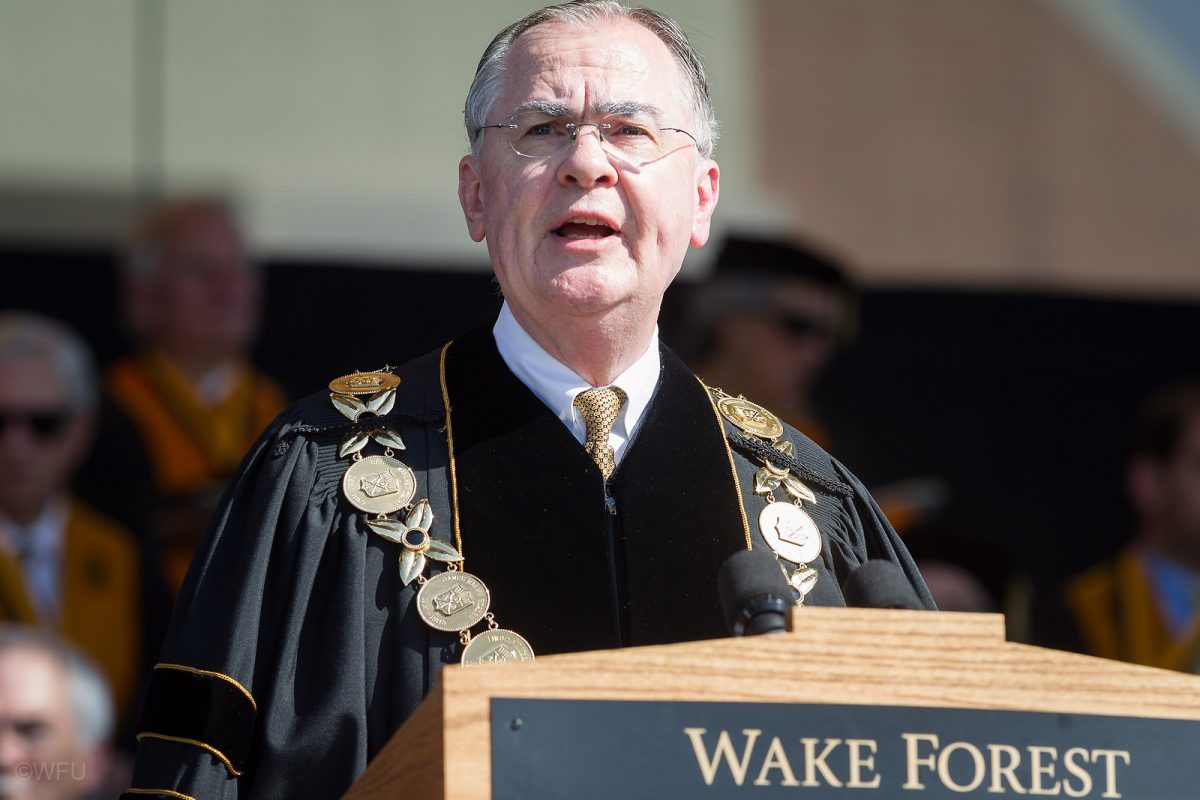 The English poet Elizabeth Barrett Browning once said that persons who get the most out of life are those who breathe the most air. So graduates, on this joyous occasion, with exams behind you, I want to encourage you to breathe. Your work is finished. You now can deeply exhale and inhale without glancing at your iPhone calendar to check for the next meeting, lab, paper or test.

Graduation is also a great time to breathe in another sense—to stop and think about the larger contours of your own life. This is a pivotal moment, one that calls for breathing room, space for you to reflect on the journey ahead.

More than ever, your generation needs to breathe in this way. Most of you have spent the last decade on a fast-moving treadmill of achievement. You have had tightly scripted lives with most waking hours spent scrambling to secure your future.

Doing well in high school so you can go to a premier college. Doing well in college so you can go land the right job or get into the right graduate school—or the right law firm, the right medical residency, the right teaching opportunity, the right pastoral assignment. Richard Kadison has depicted college life as a three-ring-circus with students as jugglers: “In one hand, they juggle the balls representing the demands of high academic performance; in another, they twirl the hoops of social relationships; and in the air, they spin the pins of their extracurricular activities.” Most of the time, you have lived with pressure to achieve.

In coming days, you need space to reconsider the grip that this achievement syndrome has upon you. Let me suggest breathing space in two areas, and in both, I want to use a Wake Forest graduate as an example.

First, learn to welcome surprises and unexpected opportunities. Many of the best things in life will come as a bolt out of the blue, interrupting your best-laid plans. A door may be slammed in your face, forcing you to take an unexpected route.

The life of so many people who accomplish important things has not been a straight path. They have tried their hand at a variety of endeavors. They have colored outside the lines. Many were late bloomers. Others started and failed and then picked up again. The contour of their life is more a jagged arc than a straight line.[1]

A good example is one of Wake Forest’s most successful recent graduates, James Beshara, class of 2008. Today, James is CEO of TILT, a wildly successful crowd funding web site that has been used by 300,000 organizations. James was recently voted one of Forbes 30 under 30 in consumer technology.

Yet one of the secrets of James success is that his plans right after graduation went up in smoke. It was 2008, and the prestigious New York bank that had offered him a job canceled it because of the financial crisis. Instead, James decided to go to South Africa with a service organization that did micro-financing. And it was on that detour, a world away, that he discovered an insight that was crucial in the success of the company he was to found.

In working with micro-finance, James discovered that the biggest motivation for repayment was social —reputation among friends and family. People paid up if their friends knew about it. They wanted to please and not be embarrassed.

That insight has been key to TILT’s success. TILT focuses on groups who know each other, and TILT makes public who has contributed and who hasn’t. This insight, gained in a most unexpected way, distinguishes TILT from its competition.

What can we learn from James’ experience? The lesson is to give yourself enough breathing room to welcome the unexpected. An experience that has little value at the time, later, in a different context, can offer invaluable insight.

My second word of advice is to stop long enough to ask: What is worth giving my life for? Are my aspirations big enough? Are they worthy enough?

The danger is that you fulfill what is expected, someone else’s definition of success—your peers, your university’s or your parents. Have you stopped long enough to think of what you really want to accomplish in life? Are your plans neat, tidy, predictable—or are they expansive?

Another story from a Wake Forest graduate – this one from Killian Noe, class of 1980, who was honored this spring with the Distinguished Alumni Award. Killian grew up in Greenville, South Carolina, was an English major here and had a strong impulse to explore the world. She taught English in Israel and served as a volunteer in a hospital in the Gaza strip. There she became deeply concerned about those affected by violence and poverty. And when she returned to Washington DC, she took note of how much brokenness she saw on the street corners of our nation’s Capitol. It was the plight of those who had fallen through the cracks that got to Killian. “It felt like a sword had gone through my heart. That’s what I wanted to do with my life.”

Killian is a deeply caring person, contagious in her affection, and she believes in building deeply-connected communities. In 1985, she and others founded Samaritan Inns to provide treatment programs and transitional housing to those struggling with drugs and alcohol.

Later, Killian moved to Seattle and founded “Recovery Café,” an amazing community of support that offers radical hospitality and a sense of worth to those battling drug and alcohol addiction, mental illness and homelessness. The café served more than 2,300 people last year; and the Gates Foundation has supported it as a national model of healing and transformation. “No one gets out of a deep pit on their own,” Killian has said. “We need each other to get out of the pit.”

When she graduated from Wake Forest, Killian Noe could never have scripted the course of her life. But she gave herself space to experience the world and be called to do important work to make a difference. She stood back, took a deep breath, and asked, not just what I want from life? What does life want from me? What are my circumstances calling me to do? She stopped, listened and found work that became her calling, work that leveraged her own warmth and love for others to make a difference in the lives of vulnerable people.[2]

Today, on this marvelous occasion, when you have achieved so much and before you plunge into your next challenge, stop and give yourself breathing room to think, to reflect, to take stock. When you inhale, give thanks for all that has been accomplished. As you exhale, make sure you are not just going through the motions, plodding along on someone else’s treadmill. Take a deep breath. Welcome the unexpected. Expand your horizons. Breathing deeply might just put you in touch with your own truest calling.

[2] On these issues, see David Brooks, The Road to Character.