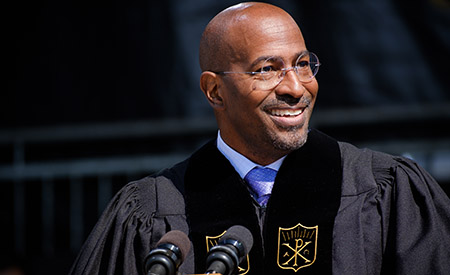 Now I want to talk to you all. I have to say this is the first class I’ve talked to that I feel intimidated by. Usually, we are talking to graduates who haven’t done through anything yet. Usually, we’re talking to young people who think – maybe – things will be hard tomorrow. But you guys have already gone through a lot.

Who does that? A fertilizer fire? And so I’m awestruck. My senior class had senioritis and bad cafeteria food. That’s about it.

You have already been through that, so I have to talk to you with a different level of respect and regard. And humility. You have gone through a lot and you have figured it out. And, thank God you did because you have a lot more to figure out going forward.

This century you are inheriting isn’t going to have one Black Swan event. I had to Google this. What’s a flock of Black Swans? It’s called a Wedge. You’re going to have Wedges of Black Swan events. Completely unpredictable. Completely unexpected and requiring the best of you. Over and over again as we get through this century. That’s a lot of pressure. But no pressure, no diamonds. And I see a lot of you sparkling out here right now.

So what does somebody like me, born in the last century, have to say to people like you? You have already endured so much and will achieve so much for us to have a human civilization worthy of either term. I have thought about it, and I do have three things to say.

First of all, be a bridge.

Second of all, don’t just make a point; make a difference.

And third of all, be encouraged.

Don’t let the algorithms fool you. Don’t let the news fool you. You mostly get along. What do you do every day as a generation that has every faith in this country? Your generation has every faith ever, every racial group ever, every gender group ever, every sexuality ever. Every kind of human being ever born is in your generation right now. And you mostly get along. I’ve been in countries that have two ethnic groups, and they fight all the time. You have 30, 40, 50 groups and you mostly get along. That is a miracle in human history. What you do every day, learning about each other and trying to figure it out when it gets messy and it gets frustrating, is a miracle in human history.

I was born in 1968. If you had told my parents in 1968 what could have been achieved in the following 50-plus years, they wouldn’t have believed it. The country was coming apart at the seams. They had just killed Dr. King. They had just killed Bobby Kennedy. They had just beaten a bunch of people bloody at the Democratic Convention. Hope was not on the high wire. Hope had been killed in America the year I was born.

My father was born in 1944 in segregation and poverty in Orange Mound in Memphis in what you would call a shotgun shack. Shotgun shack meaning the shack is so narrow that one room is behind the next room and the next room behind that so that if you fire a shotgun through the front door, you’d hit everybody.

In order to get out of poverty, my father joined the military. Everybody was trying to get out of the military in 1968. My father went in. He got out and he went to a little black college called Lane College in Jackson, Tennessee. Married the college president’s daughter. He was no joke. And then he put his little brother through college. My uncle Milton. He put a cousin through college. Everybody in my family who got out of poverty got out of poverty on this bridge called my father’s back. And when he died, the picture they put on the funeral program was of my father standing in front of Yale Law School the day I graduated with his hands up. And he said, “Son, you’re a ninth-generation American, but you’re the first one in my family who was born with all your rights recognized by this government. And look at what you’ve done.”

I’m not telling you something I haven’t lived. When I burned out in Oakland, California, I was trying to outdo my father, trying to help more people than he helped, which was impossible. I had been to too many funerals. I had seen too many young people in caskets and with gray-haired folks sitting in the pews. The opposite of what it was supposed to be.

I was burned out. I was through. I can’t do that and not have it affect me. I’m resilient. I’ll come back. If you hit me, I’ll cry. If you cut me, I’ll bleed. I had to walk away from the urban blight. I couldn’t do it anymore. I battled and just tried to get some help, some emotional, mental and spiritual help. I found communities of faith that had people who didn’t look like me, who didn’t come from where I came from. They were wealthier than me. Some were more conservative. But I discovered some of them working on organic food, in solar energy. They had hybrid cars. They had solar panels. They had salads. All kinds of weird stuff, man.

And I reached out and I said, “Can we get some of the kids in Oakland working for you, working with you? Do you want to repower America with clean energy? You want to put up solar panels everywhere? That’s the most important work that needs to be done? Let the people who most need work, the people standing on street corners, with no hope, do the work that most needs to be done. Let’s fight pollution and poverty together.” And we brought together an unbelievable coalition of rich and poor, of Black and white, of racial justice environmentalists that inspired the Bay Area.

A woman named Nancy Pelosi was so shocked by what we were doing in getting these kids from the community putting up solar panels that she took me to Washington, D.C. Guy named George W. Bush signed the bill. It just spread all the way across the country.

A couple of years later, I’m working with Barack Obama in the White House. And then I started working with a guy named Donald Trump. And people were shocked. They said, “How can you, a Democrat, walk in the front door of the White House and sit down with Donald Trump and Jared Kushner and all these people? You’re a sellout and a traitor. What are you doing?”

But I knew was this: None of the people in federal prison had anything to do with that election. They couldn’t tweet. Couldn’t march. Don’t donate to anybody. Because neither party likes them that much. And I knew Jared Kushner’s father had gone to prison. I told Jared Kushner, “With you, I’ve got 99 problems. And prison ain’t one of them. We can do something to help the people who are locked up.”

I had been to prisons as a lawyer. Nobody behind bars ever told me, “I’m locked up. I’m suffering. I’m hurting. I’m miserable. But whatever you do, Van Jones, don’t talk to Republicans.” They didn’t say that.

As a result of reaching across that bridge, we passed important criminal-justice legislation. And there are not two. No 20. Not 200. Not 2,000. But 20,000 human beings are home right now and with their families because we passed that bill. Be a bridge when people tell you it’s hard. And people will tell you it’s hard. Don’t just make a point; make a difference.

Keep winning and thank you very much.