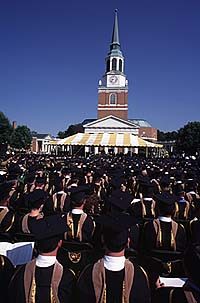 Bowles, who received an honorary doctorate of laws degree, addressed a crowd of about 10,000 people. Approximately 825 bachelor’s and 553 graduate and professional degrees were awarded during the outdoor ceremony on the university’s plaza.

There is no clear “recipe for success,” said Bowles. “In the grand game of life I think you will find that true success is simply being happy. Happy at home, happy at work and happy in the community.”

Bowles mapped out seven basic principles to help meet the challenges of the real world.

He said his most important principle was to save time for your family and other people in your life.

“When you look for a job, look for a family-friendly place to work — one that encourages you to spend time with your family. Then do it.”

Also, focus on doing the little things right, said Bowles, who used an example from his work with Congress.

“The difference in one senator or one congressperson voting with the president can sometimes mean the passage or failure of a bipartisan budget deal that could have enormous ramification in your life for years to come.

“Just think for a second how awful it would be, at least for me, if I assured the president that victory was ours only to lose because I assumed I had a vote I hadn’t verified.”

On always providing quality work, Bowles cited advice given to him. “It’s like this friend of mine in the movie business once said to me. He said, ‘Erskine, if you make a bad movie the people will not come and you cannot stop them.’ It’s kind of reverse logic, but if you think about it he got it right.”

“If you’re going to be successful, you can’t ever believe you have found the answer — that the way you are doing it today is as good as it can be done.”

And despite hectic schedules, make your community a priority. “My daddy used to say that all of us have a responsibility to add to the community woodpileÖHe stressed that anyone can help somebody when they’re up, but it is the good person who is there for you when you are down.”

Bowles also quoted Dr. Martin Luther King Jr. who said life’s greatest question is, ‘What are you doing for others?’”

“Our time, money and energy are precious commodities,” Bowles added. “It is often hard to really want to give them away, but when you do give to your community, when you do add to the woodpile, you will experience a pride and sense of purpose like no other.”