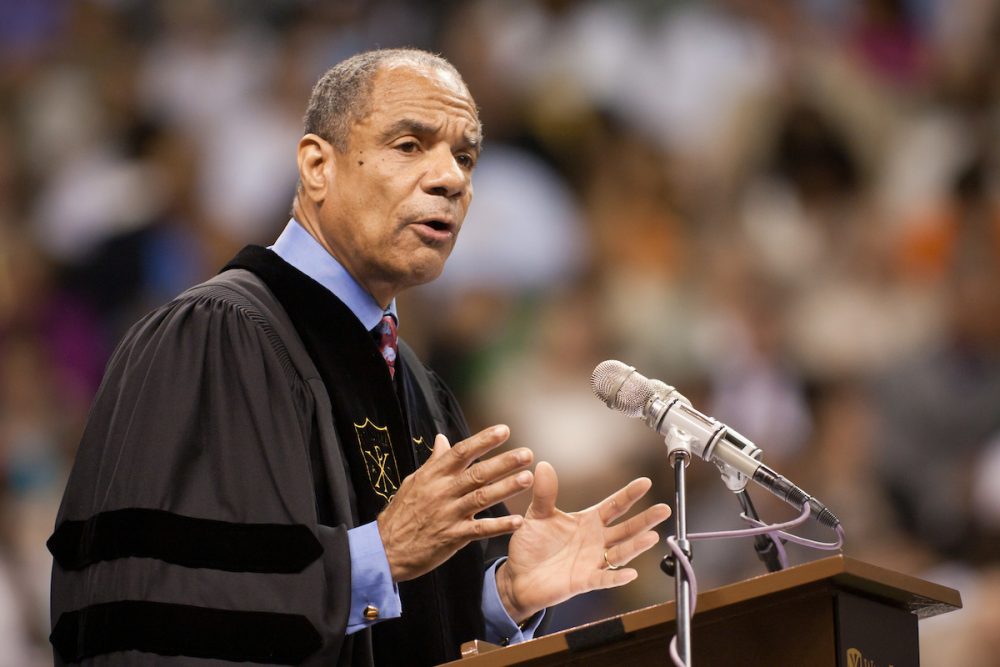 Thank you President Hatch. Thank you for this honor. Thank you all for the warm welcome.

And thank you to Wake Forest Class of 2010 for giving all of us a cause for celebration. I should start today by making an admission. It’s a little embarrassing.

In preparation for this speech… I “googled” myself.

This is a very big day. Commencement marks an incredible achievement. It speaks not only to your potential – but also to our country’s promise.

I wanted to get it right. And that meant doing some homework.

So I asked my good friend Dean Reinemund all sorts of questions.

I thought perhaps the graduates from the School of Business had heard of me. But, I wasn’t sure what everyone else knew.

I did some web research. And I very quickly found an article in the Winston-Salem Journal.

It said everyone in town was really excited. And the reason was stated right there in the headline:

I felt great, but turns out — it was a different Chenault.

As I’m sure most of you already know – a star basketball recruit who will be a Demon Deacon next season.

Now, I could tell you that I have a pretty good jumper…

Or, that I’ve become good friends with Chris Paul.

But instead, I’ll say this: I might not be the Chenault everyone on campus is waiting for … but I could not be more thrilled to be here. To share this special day with you.

Because, Wake Forest University Class of 2010… you did it. Congratulations. You did it. And you deserve all the credit in the world.

But, as you know better than anyone, you didn’t do it alone.

The faculty and administration deserve our gratitude and our applause.

And so does another group. The parents.

To the parents, I say: sitting here today in Hearn Plaza, adorned in Cap and Gown, are not only proud graduates of Wake Forest University…. but the best possible return on your investment.

You are right to be so proud. And you deserve a round of applause, too.

But you didn’t do it alone and let me add… you’re not done either.

It’s now up to you to make sure that your parents receive a dividend on their investment for many years to come.

And as a parent, let me say I hope that includes, at the very least, a phone call now and then.

(And, no …… text messages and Facebook updates do not count.)

But what do I mean when I say ‘you’re not done?’ That you have more to do?

Undoubtedly, the memories from your time here will last a lifetime.

The all-nighters in ZSR Library.

Watching Riley Skinner, who will walk across this stage today, march down a football field and lead Wake Forest to the Orange Bowl.

Cheering in your black and gold tie dyes … as you beat Duke. And North Carolina.

Great memories. But you leave this campus with more than the memories. You leave with a mission.

It’s to take what you’ve learned and lived here… And apply it.

That’s not just an opportunity. I believe it’s an obligation.

With the education and achievement this day recognizes… you have an obligation… to serve. And by serving… to lead.

An obligation to be leaders. And to help shape society and shape the future by serving it.

Maybe it’s a surprising challenge coming from a CEO in the financial services industry.

You don’t need an opinion poll to know that very few people believe corporations always deliver on their social responsibilities.

But the challenge I describe should not be all that surprising.

My generation – that of many of your parents – came of age at a time when Dr. King… with the help of a future Reynolds Professor of American Studies named Maya Angelou… was reminding us that even amidst vicious hatred and violence… the battles for our God-given rights should be civil.

We came of age at a time when women were hard at work washing away old stereotypes.

We came of age when a book called “Silent Spring” led to a clarion call to protect our environment.

In the wake of the distrust of Watergate and the divisiveness of Vietnam, we came of age demanding institutions become more open and transparent.

These events did not leave us unaffected. It did not create a class of plutocrats. Rather, as Dr. Angelou has said, “The needs of society determine its ethics.”

As individuals and as a generation, these events defined us. They determined what we’d do and how we’d act.

And for some of us who went into the corporate world, that meant fundamentally rejecting the Milton Friedman argument that – quote – “There is one and only one social responsibility of business — to use its resources and engage in activities designed to increase its profits.’”

Instead, many of us believed – and still do — that business exists because society allows it to exist.

And in exchange for that permission to pursue profits, business must behave and act in ways that protect and enhance the world we live in.

In other words, a business exists to serve. To serve its customers… and to serve the communities in which it operates.

You can’t just look at the bottom line.

There is an impact on society that goes far beyond the products or jobs it creates.

In fact, it is a great source of pride and a constant motivation that my company – American Express – has historically put a premium on service.

And that is continues to be our highest priority in this current economic environment. This notion of businesses needing to be involved is only increasing.

People no longer just accept a company acting in a responsible way …. in a way that contributes something more to society. They rightfully expect it.

That includes customers and also future employees. So we – and many other companies, as well – look for new ways to contribute.

From making sure our operations are green… to philanthropic activities… to not just supporting employees who volunteer, but encouraging them to volunteer.

The point of all my examples is this: My generation believed very much in our country’s lofty ideals. We knew they were sound.

But we also realized something else: that we had an obligation.

And that obligation was to question whether or not we were living up to those ideals.

Now, I’m not so naïve to think that we’ve come far enough. We cannot deny that inequalities still exist.

We won’t pretend that every corporation shares this perspective, or for that matter, that every shareholder wants them to.

But I also believe that by asking questions and demanding not just answers but action – we helped solidify diversity and openness and stewardship as moral values.

We saw our own country – the way it was and the way we wanted it to be — in a different light. And the result – undeniably – was change.

We haven’t done enough. There’s still much more to do. But, the change has clearly been positive.

Now, it’s your turn to make your mark, too.