“If You See Something, Do Something” 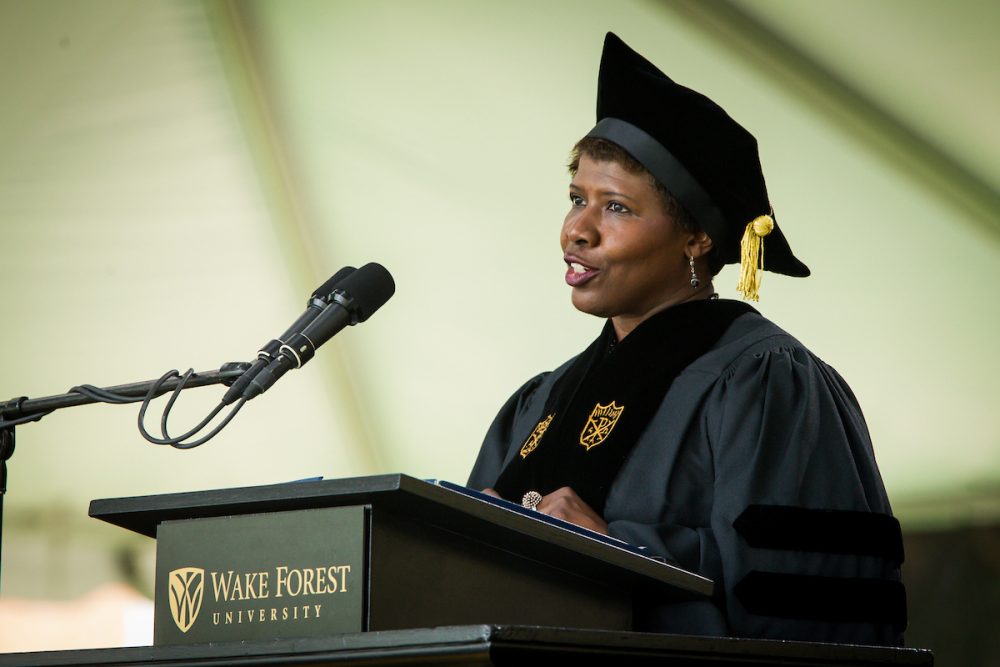 Remarks as written by Gwen Ifill, Moderator and Managing Editor of “Washington Week” and Senior Correspondent for the “PBS NewsHour”
Wake Forest Commencement
May 20, 2013

And thank you, President Hatch, for having me. I’m happy to be here on such a great day.

Actually, I’m happy to be anywhere where they don’t confuse me with Queen Latifah.

Saturday Night Live impersonations are a blessing and a curse.

I have been blessed over the years to share days like this on college campuses all over the country. Along the way, I have learned a thing or two about commencement speeches.

Among them: everyone’s in a pretty good mood.

And almost no one is here to listen to me.

In fact, there is an excellent chance that you will not remember a word of what I say here today…or that I was here at all. In fact, I may be one of the last things that stand between you and a really good party.

So it is my challenge to work with that, to keep it short, and, with some luck, memorable in a good way.

I know, for instance, that eleven of you have been chosen to be Fulbright Scholars. Congratulations.

I also know that you’ve been debating among yourselves which is more valuable – business or liberal arts.

But I also know that for you, higher education means more than getting an advanced degree, and that liberal arts are about more than gazing into the clouds.

It all will have practical impact on the lives you are now launching.

Four years ago when you got here, Lehman Brothers was collapsing, the housing bubble had burst, and college seemed more refuge than opportunity.

You were not alone in your fears and uncertainty. In fact, it made you part of a world, of a shared human experience, where the challenges are right in your face…and that makes the options before you extraordinarily clear even when the choices can seem so murky.

I get that the world outside this campus, and outside our borders can seem like a collection of contradiction…distractions and conflicts that breed hunger, war and malevolence.

But you’ve had the gift of time while you’ve been here at Wake – the first world luxury of being able to consider what comes next, not just grasp at the first passing opportunities.

I hope you’ve used it well. Because now, it’s on.

And I’m not just talking about getting a job. That’s important, but if you haven’t already, you have to decide what you care about, and then be prepared to act.

You know how, when you’re traveling, the TSA likes to tell us, “if you see something, say something?”

My charge to you today is, if you see something, do something.”

I don’t care if you’re Tea Party or Occupy. Do something.

It doesn’t matter to me if you want marriage or career, both or neither. Do something.

It is not essential that you care about every thing. But you have to care about something.

This is that moment when it helps to think back to what brought you here today.

Somewhere along the way you have acquired a mission.

Sometimes it just means thinking about how you speak, not just speaking.

I’m on Twitter, where a lot of people speak without thinking.

But earlier this week, I went on Twitter to ask what you wanted to hear from me today. I got two responses that are worth sharing, because they dovetail with exactly what I wanted to say to you today.

The first tweet said I should speak about how to contribute to real public discourse in an age of extremes.

Funny that I should have come across that in the middle of a stream of Twitter argument about whether the President of the United States should allow a uniformed Marine to hold an umbrella over his head in the rain.

We live in a world of extreme, often petty, argument, where we hide behind our devices to insult one another in a way we would never do face to face.

Technology is fabulous, but this is not what it is for. We have to harness our thinking, and our expression, to add to the debates around us…not to debase it.

You can change that.

Another response I received on Twitter hit on that same theme.

This tweeter worried that technology is surpassing humanity, and asked that I speak of the need for communication to be the medium, not the message.

You can do something about that, too. But here’s a hint: don’t take your guidance from what you see in Washington.

It’s too often the worst possible example of how to make change.

Real change comes from the people who make up their minds that if they see something, they will do something.

Politics does not necessarily lend itself to that.

Listening to me, you would think I have become cynical after all the years I’ve spent in Washington. But I am not.

Skeptical, perhaps – that’s an occupational hazard. But not cynical.

You see, cynics think they know the answers already, and then they stop listening.

Skeptics always have more questions to ask, but we are willing to be persuaded to the honesty of an alternate point of view.

Is it possible to be skeptical? And optimistic? And ambitious? Open? And excited at possibility? And willing to change the world too?

Some people think you have to be lucky for all of this to happen. But I only believe in the luck you make with the tools you have.

My parents were immigrants. I was not supposed to be here today, receiving your honorary degree.

Were they lucky, or did they make their luck by choosing to be Americans?

Are you merely lucky to be going into the world with a Wake degree? Or are you going to shape your own success with the tools you have gained here?

The only questions, it seems to me, is if you will bring your humanity to the task and if you will take into account the possibility of unlikely outcomes.

That means you have to be prepare for life to knock you off course. You have to stay curious after your formal education ends.

You always have to have another question in your hip pocket, a follow-up question we call it in the business. Something that will take you out of your comfort zone.

A lot of people get to college thinking, “I’m going to be a scientist,” and then they discover, “but I hate biology.”

So you have to be open to the possibility of a change in direction. That stays through throughout your life.

And you have to consider the possibility that the first answer might sometimes be no.

I wrote a book a couple of years ago about breakthrough political candidates. They had a lot in common, most of all that they said yes. Especially when people told them no.

They were always told to wait their turn, that they were not something enough, that they would never win.

They each heard no, but said yes. And they broke through.

But I want you to be so successful that you won’t hear no – that your children will never remember a time when it was unusual to see an African American President, or a woman as Secretary of State, or a Latino on the Supreme Court.

They’ll be shocked to read in their history books, that it took so long.

They will be prepared for sudden change, even when it seems like it takes forever to get there.

I have a small confession.

When I was growing up, one of my favorite books was Winnie the Pooh.

I think I found something appealing in the contrast between Pooh’s nervous sunniness, Tigger’s antic excitement and Eeyore’s depressive nature.

Pooh’s author, A.A. Milne, understood the benefits of the unlikely friendship of the stuffed bear, the dancing tiger and the sad donkey.

They were disorderly, but as a trio, they made sense.

“One of the advantages of being disorderly,” Milne wrote, “is that one is constantly making exciting discoveries.”

I guess I became a journalist because I always think there are new and exciting discoveries just around the corner.

Discoveries in an age where everyone has an opinion, but so little is new and so much is trite…

And discoveries in a time when we demand the right to ask questions, get answers, and then do something about it.

I wish several things for you today, not least of which that you too one day have a mentor like I had in Tim Russert, the Washington NBC news bureau chief who passed away in 2008 just before he was to deliver the commencement here.

Someone who will watch out for you once you do it, and make sure that you succeed…

Tim taught me all those things. And though I don’t think I ever told him how much I appreciated it, I think he would love it that I am telling you instead.

Up until now, you have probably been keeping promises made to other people – to your parents, to your professors and to your friends.

Today, I ask you to make and keep a few promises to yourself.

A promise to find a mission for your life…

A promise to fix and explain and investigate, and understand…

A promise to use what you have learned here about potential – the potential of rebuilt bridges and healing words – to create new relationships where none existed before.

Oh, and don’t forget to laugh along the way. It’s the only way any of it can come together. You can’t be happy unless you’re laughing, especially at yourself.

If you have learned all that… If you understand that your learning does not end today – that it only begins – you will make us all proud.

Families, faculty, graduates, thank you for the honor of including me in the Wake Forest Class of 2013.

Have a wonderful day.