In seeking truth you have to get both sides of a story.

How many of you have visited the new website The Flip Side?  It is the brainchild of Annafi Wahed, a 2012 graduate of Bryn Mawr College who works in the financial industry. Dismayed by intense partisanship in the media today, Wahed created The Flip Side as a one-stop shop for bipartisan political analysis.  Each day, The Flip Side sends out an email with a brief summary of what the left and the right have to say about breaking news stories. She said: “We want the average person to take five minutes of their day and see the nuanced sides of both arguments. It’s not about changing people’s minds; it’s about creating awareness of each side’s valid argument.” 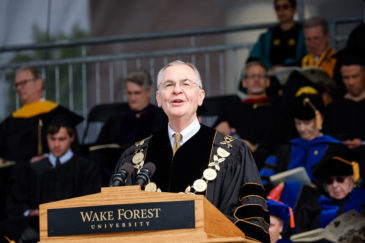 The title of my talk today is “Both. . . And,” and my theme is the pressing need for all of us to understand the other side. All of us today have less experience seeing both sides of an argument, of seeing leaders who disagree sit down for considered and thoughtful discussions. Late night comedians scapegoat conservatives as misguided, racists, and bigots; and talk radio hosts accost liberals as politically correct snobs who scorn the second amendment, the nuclear family, and religious freedom.

According to a recent Pew Research Center Poll, we have become far more tribal, self-sorting into ideological islands. A majority of Democrats and Republicans hold “very unfavorable” views of the opposing party. “The media climate now,” columnist Peggy Noonan opines, “ . . . is too often of a goading, insinuating resentment, a grinding, agitating antipathy.” Or as someone else has said, “We are drowning in outrage stories.”

With this split screen view of reality all around us, the danger is that we jump into advocacy without fully understanding the best arguments of the other side, and we leap to ridicule their positions and disparage their motives. We compare the best side of our own position with the worst side of the other—often a mere caricature.

Now in suggesting a “both. . . and” approach, let me say what I do not mean. Yogi Berra once said of a baseball player: “He hits from both sides of the plate. He’s amphibious.” I am not calling for more amphibians. I am not talking about milk toast compromise or always taking a middle course, or flip-flopping from side to side on a given issue. “He who walks in the middle of the roads gets hit from both sides,” Secretary of State George Schultz, once noted. What I am calling for is the decency, humility, and intellectual honesty to learn and acknowledge other points of view—and to treat with dignity those whom you think are wrong.

Why is understanding the other side so essential to democracy?

In the first place, listening to and understanding an opposing position is the best way—and probably the only way—to fully grasp what you believe and why you believe it. It is why I like to read the New York Times and the Wall Street Journal, and why I recommend that students read both Ta-Nehisi Coates’, Between the World and Me and J. D. Vance’s, Hillbilly Elegy. Seeing both sides gives us a more complete view of reality and helps us clarify our own distinct points of view rather than simply reciting a party line.

That is why I trust Wake Forest can continue forge a middle ground that welcomes a spectrum of viewpoints, promotes the art of conversation and prizes the common good.

Graduates, as you leave Wake Forest today, I challenge you to draw upon the curiosity and intellectual integrity that you have learned here. Don’t just hunker down with those who agree with you. Read widely and try to understand fully the other side.

A second reason to understand the other side is to persuade. Though counterintuitive, it turns out that listening is far more persuasive than arguing. Arguing rarely changes minds and often annoys and repels people. Careful listening, on the other hand,  builds trust, particularly if one shows respect for others, takes seriously their best arguments, and looks for a elements of common ground.

President Dwight Eisenhower, despite his experience with military command and control, noted this about the art of leadership. He said:

You do not lead by hitting people over the head. Any damn fool can do that, but it’s usually called ‘assault’ – not ‘leadership.’ I’ll tell you what leadership is. It’s persuasion – and conciliation – and education – and patience. It’s a long, slow, tough work. That’s the only kind of leadership I know – or believe in – or will practice.

This kind of mutual understanding – this give and take – is the path to meaningful compromise and that is essential in a society that is as divided as American today. Social media has lowered our national debates into an angry brawls, making bipartisanship ever more difficult. Graduates, it will be the challenge of your generation to recover ways that leaders, listening to all sides, can craft bipartisan solutions for our most thorny problems.

The final reason we need to understand each other is to restore a common vision and hope that has long animated the American Republic, what Lincoln called this “last best hope of earth.” After surveying the decline, decay and polarization of the small town in Ohio where he grew up, Professor Robert Putnam concludes that our major problem is a “radically shriveled sense of ‘we.’…The American dream has morphed into a split-screen American nightmare.” Columnists Michael Gerson and Peggy Noonan both have made the same point: We are ceasing to believe in the miracle at our country’s heart – the unifying power of American ideals.

Today, there are few voices who rally us to seek the common good and who lift up any shared dream. “So the question remains: Can we achieve both…and? Can we both disagree on certain things and join hands on others? Can we both hold fast to our own beliefs and share a larger collective dream?

Can we say, with Lincoln, who said even when beset by the scourge of Civil War: “We are not enemies, but friends. We must not be enemies. Though passion may have strained, it must not break our bonds of affection.”

Can we identify with Martin Luther King, who appealed to the same mystic chord of memory: “I have a dream that my four little children will one day live in a nation where they will not be judged by the color of their skin but by the content of their character. . . With this faith we will be able to transform the jangling discords of our nation into a beautiful symphony of brotherhood.”

Do we have any vision like that of Ronald Reagan who, in his 1989 Farewell Address returned to the theme of America as a shining city on a hill. “And how stands the city on this winter night?” he asked.  After 200 years, he answered, “She still stands strong and true on the granite ridge, and her glow has held steady no matter what storm. And she’s still a beacon, still a magnet for all who must have freedom, for all the pilgrims from all the lost places who are hurtling through the darkness, toward home.”

With different intent, but with no less common hope, Maya Angelou, at President Bill Clinton’s first inauguration, called all Americans, of every race, religion and creed to “give birth again to the dream.”

“Here on the pulse of this new day
You may have the grace to look up and out
And into your sister’s eyes, into your brother’s face, your country
And say simply
Very simply
With Hope
Good Morning.”

Today, we long for that kind of uplifting and unifying hope, a “good morning” embrace. Rekindling that dream can only begin with listening to the other side.

Today, as you depart Wake Forest, I call upon you to pursue “both…and” – to hold out your hand, look into the eyes of your sisters and brothers, open your ears and listen.