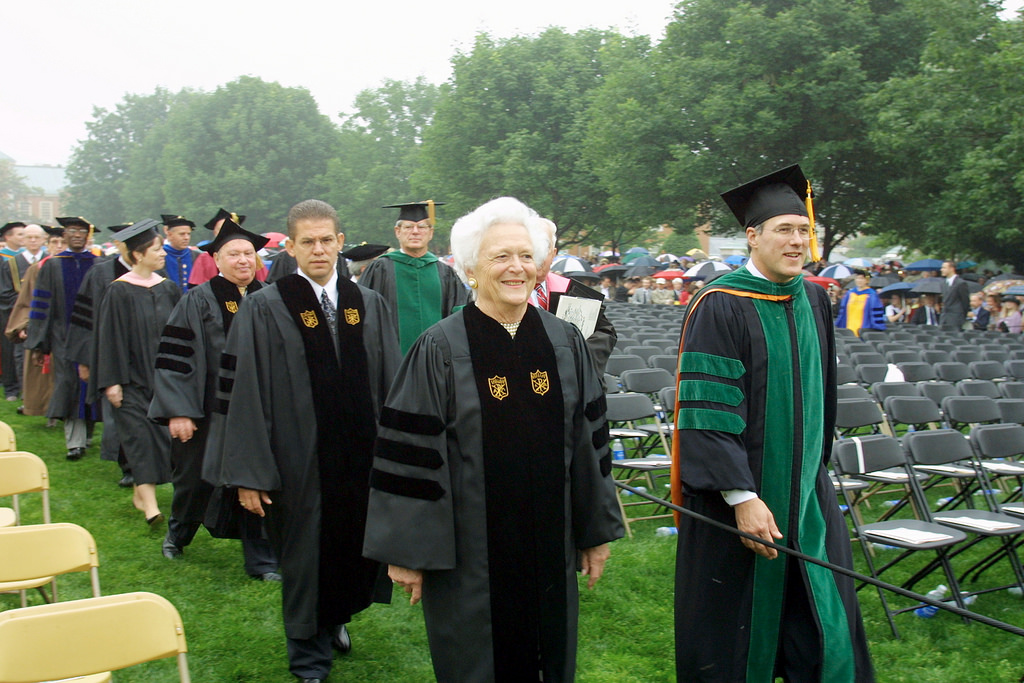 Former first lady Barbara Bush challenged Wake Forest University graduates during its May 21 commencement ceremony to continue to live out the university’s motto, Pro Humanitate (In Service to Humanity), after they leave the university.

“Thanks to Wake Forest’s wonderful tradition of service, embodied in your school motto, you’ve already been taught the value of service to others,” Bush said. “But now comes the hard part, figuring out how to carry on this tradition for the rest of your life.” Bush said. She was awarded an honorary doctorate of humanities during the ceremony.

As 1,349 graduates gathered outdoors on University Plaza, Bush spoke to a crowd of more than 10,000 friends and family. Light rain showers earlier in the morning threatened to move the ceremony indoors, which has not happened since 1991. To prevent diplomas from getting wet, graduates picked them up at indoor locations following the ceremony.

Barbara Bush is the third member of the Bush family to appear at Wake Forest. Both her son, President George W. Bush, and her husband, former President George Bush, debated presidential opponents in Wait Chapel.

Noting her son’s visit to campus in October 2000, Bush said, “I am assuming that since you invited the mother, the son must have behaved fairly well.”

“First, you must believe in something larger than yourself,” she said. “You must get involved in some of the big ideals of your time. I chose literacy because I honestly believe that if more people could read, write and comprehend, we would be so much closer to solving so many of the problems plaguing our society. It’s all about giving back some of what you’ve been given.”

Secondly, Bush reminded students that life should be fun. “One of the reasons I made the most important decision in my life, that of marrying George Bush, is because he made me laugh,” she said.

“The third choice that must not be missed is to cherish your relationships with friends and family,” she said.

“There’s a big difference between having a career and having a life. Be sure not to confuse the two,” Bush added.

Bush also recognized the university’s 2000-2001 theme year. “I love that you just celebrated the Year of Ethics and Honor here at Wake Forest and that the idea was of one of your graduates,” she said. “That means you already understand the advice to always tell the truth because character really does count.”

“You leave this very special place armed with a wonderful education and the love and support of family and friends,” Bush said. “Now go out, make us all very proud.”

For the second consecutive year, the commencement ceremony was Web cast through a real-time video feed. The Web cast is archived on the university’s Web page and can be viewed at www.wfu.edu/alumni/graduation.