The following speech was delivered on May 21, 2001 and was transcribed by the Wake Forest News Service. 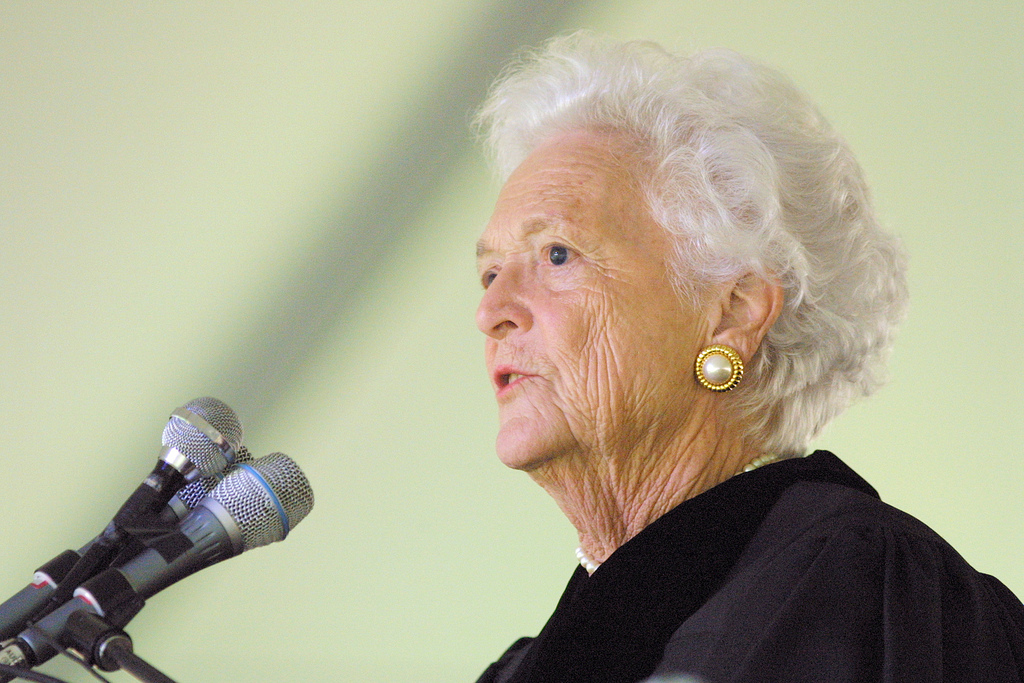 Thank you very, very much. Thank you President Hearn, trustees, faculty, parents, and, of course, the Class of 2001. I’m really delighted to be here today on this very special day as you leave this really beautiful campus. I’m told that your four years here, and I should say graduate students, too, however many years you spent here, have been filled with very many exciting triumphsÖ You know, you’ve had two historic debates. I was here for one of them. And then again you had a very exciting one this year. And I am assuming that since you invited the mother, the son must have behaved fairly well.

You know, he is giving the graduation speech at Yale University today. I hope they’re treating him as well as you’re treating me. What a wonderful journey it’s been for all of you. And now that you’ve taken your last exam and survived the meals at the Pit, sworn off Freddie B’s forever, and quit wasting your time at Shorty’s, the last thing you need standing between you and the rest of your life is a long commencement speech. I promise to do my best to emulate Winston Churchill when he was asked to address a class of British prep school students and he got up and he said, “Never, never, never give up,” and then he sat down. Well you’re not going to get off that easily, but I will take up where he left off.

Never, ever give up. Awaiting you is a whole world, a new world, and a lifetime of challenges and opportunities. And I’m not sure how many hockey fans there are here at Wake Forest, but I love the quote from the great hockey player, Wayne Gretzky. “You miss 100 percent of the shots you never take.” So don’t be afraid to take your best shot. Chances are, you’ll miss quite a few, but it’s the ones you make that will be remembered. Remember that decisions are not irrevocable. Choices do come back, and as you set off from Wake Forest, I hope that many of you will consider making three very special choices.

First, you must believe in something larger than yourself. You must get involved in some of the big ideals of your time. I chose literacy because I honestly believe that if more people could read, write and comprehend, we would be so much closer to solving so many of the problems plaguing our society. It’s all about giving back some of what you’ve been given, and thanks to Wake Forest’s wonderful tradition of service, embodied in your school motto, in service to humanity, you’ve already been taught the value of service to others. Some of you have traveled as far as India, and Tbilisi, Georgia, to help those who are less fortunate, while at the same time not forgetting your neighbors in Happy Hills and other local communities. But now comes the hard part, figuring out how to carry on this tradition for the rest of your life. When in India, working in Mother Teresa’s “City of Joy,” you might have heard about something she once said. “Every day we are called to do small things with great love.” Another very wise person, certainly not a saint, but a very wise person said recently, “I ask you to be citizens, not spectators, responsible citizens building communities of service, and a nation of character.” These were the words of our president, George W. Bush, during his inaugural address. The point of this saint and this president is the same. It’s important to get involved in your communities, to figure out a niche for yourself, and to remember that no act of kindness or caring is too small. A good place to start is to learn to love and care for each other. Learn not only to respect, but to celebrate the differences in each of us.

Robert Fulghum tells the story about a young pastor, who finding himself in charge of some very energetic children, decided they should play a game called “Giants, Wizards, and Dwarfs.” You have to decide, right now, the pastor instructed the children, which you are. A giant, a wizard, or a dwarf. And at that, a small girl, tugging on his pant leg asked, “But where do the mermaids stand?” And the pastor told her, “There are no mermaids.” “Oh yes, there are,” she said, “I’m a mermaid.” This little girl knew what she was, and she was not about to give up either her identity or the game. She intended to take her place wherever mermaids fit into the scheme of things. Where do mermaids stand, all those who are different, those who do not fit the boxes and the pigeonholes? Answer that question, wrote Fulghum, and you could build a school, a nation, or a whole world on it.

Early on, I made another choice, which I hope you will make as well. Whether you’re talking about education, career or service, you’re talking about life, and life is supposed to have joy. It’s supposed to be fun. One of the reasons I made the most important decision in my life, that of marrying George Bush, is because he made me laugh. It’s true sometimes we’ve laughed through our tears, but that shared laughter has been one of our very strongest bonds. I’m not amused that he keeps jumping out of perfectly good airplanes, but nevertheless that is one of the ways that he is still finding great joy and fun in life even as he approaches 77 years of age. It’s especially important to laugh at yourself. And I’ll never forget a few years ago when our beloved dog, Millie, died, I really could barely talk about it. I was very unhappy. It just so happened that the next day, I was scheduled to speak to the National Convention of Veterinarians. Now George sent me off to that speech swearing that he knew a veterinarian who had merged with a taxidermist. Now their motto was, “Either way, you get your dog back.”

Now that, that is a very silly story, but it makes me laugh. And it’s true, for all you doctors in the audience – laughter is the very best medicine. Now the third choice that must not be missed is to cherish your relationships with friends and family. For several years you’ve had impressed upon you the importance of your career, of dedication, and hard work. As important as your obligations as a teacher, a doctor, a lawyer or a business leader will be, your connections with spouses, with children, and with friends are the most important investments that you will ever make. There’s a big difference between having a career, and having a life. Be sure not to confuse the two.

At the end of your life, you will never regret not having passed one more test, not winning one more verdict, or closing one more deal. You will regret time not spent with a husband, a friend, or a parent. And you know I’ve been asked many times of late, “How do we prepare America for this new century?” And I always suspect the people who are asking this question are looking for a very complicated answer with a lot of philosophical ponderings. It reminds me of when Sherlock Holmes and Doctor Watson went on a camping trip, and after a good bottle of wine and a meal they lay down and went to sleep. Some hours later, Holmes awoke and nudged his faithful friend. “Watson,” he said, “Look up and tell me what you see.” Well, Watson replied, “I see millions and millions of stars.” “Well what does that tell you?” Watson pondered for a minute. “Astronomically, it tells me there are millions of galaxies and potentially billions of planets. Astrologically, I observe that Saturn is in Leo. Horologically, I deduce the time is approximately a quarter past three. Theologically, I can see that God is all-powerful and that we are small and insignificant. Meteorologically, I suspect that tomorrow will be a beautiful day. What does that tell you?” Well, Holmes was silent for a minute, and then he spoke. “Watson, you idiot, someone has stolen our tent.”

Now, just as Watson did, it’s important to stretch your mind and your imagination to reach out and find answers to the harder questions and to take on the more difficult challenges. But it’s also just as important not to overlook the answers that are more obvious but too often ignored. Do the same when you play and remember to be a gracious winner, a good loser. I love that you just celebrated the Year of Ethics and Honor here at Wake Forest and that the idea was of one of your graduates. That means you already understand the advice to always tell the truth because character really does count. And don’t forget to love one another and be generous of heart and spirit. They’ll be a lot of bumps along the way, some you can control, and some you can’t which brings me back to Winston Churchill’s advice. Never, never, never give up. You leave this very special place armed with a wonderful education and the love and support of family and friends. And all our hopes and good wishes go with you. Now go out, make us all very proud. God bless you.