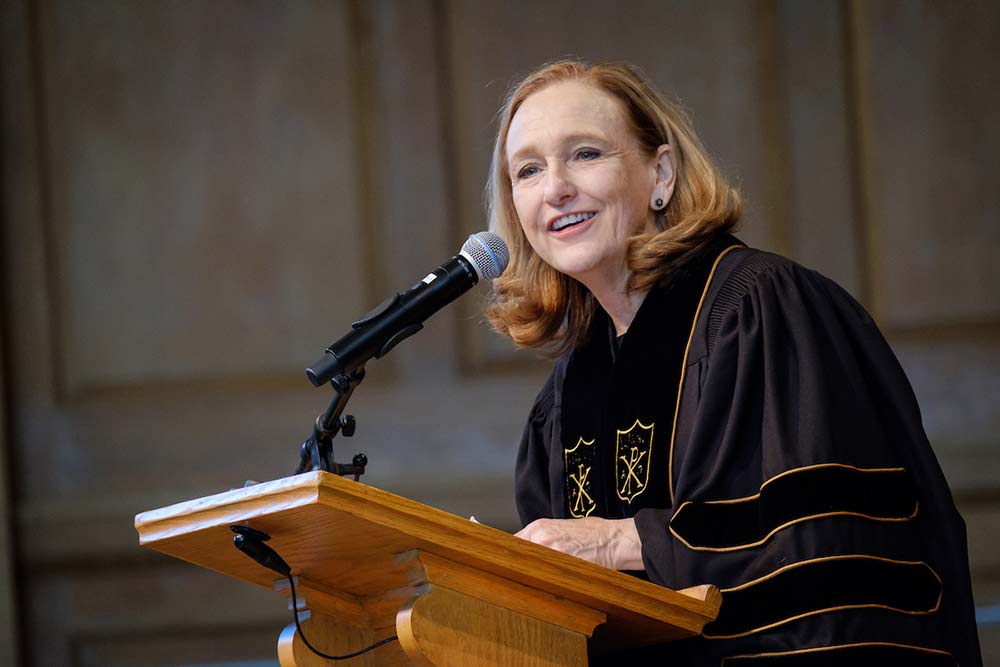 Remarks as given by humanitarian and author Killian Noe (’80) at Wake Forest Baccalaureate
May 14, 2017

Good morning and happy mother’s day to all the mothers. And to the graduates, you give me hope.

When I was in the stage of life you are right now, having just completed my studies at Wake Forest, I traveled to the Middle East to serve as a volunteer for two years. Even though while I was here, I had the iconic professor Dr. Ed Wilson for Romantic Literature, I didn’t have much luck with romance in my personal life. But sometime after my first year in the Middle East, I met this super-cute, super-smart guy from Boston. I fell for Bernie from Boston immediately. And after we had been hanging out for a few weeks, I shared, “Bernie, remember that first day we met? I was thinking that first day, ‘I really like this guy.’ What were you thinking that first day?” Bernie, always a straight shooter, said, “I was thinking, ‘I think she really likes me.’ ”

OK. So maybe I’m not that mysterious. But Bernie and I have now been married for 35 years.

Our Scripture reading this morning tells the story of a much earlier time in the Middle East, when a new pharaoh arose in Egypt who, out of fear of the Hebrews being far too numerous, began to enslave and oppress the Hebrew people. As you know from the reading, the pharaoh even went so far as to order the midwives to kill every Hebrew baby boy. But the pharaoh’s attempt was met head-on by the midwives, who, in the first recorded case of civil disobedience in the Bible, did not do what the pharaoh told them to do.

What compelled these midwives to risk their lives by refusing to go along with the pharaoh’s order? What gave these midwives the courage to live lives of rigorous resistance to the dominant culture of fear and exclusion? The Hebrew text answers, “Yare Elohim,” which, according to one of my favorite Hebrew scholars, was another way of saying they were in awe of the divine in every living being.

The first traveling tip – and we must make no mistake about it – is that the way of love, the way of resistance to fear, hatred and exclusion is a rigorous, alternative way. The way of love is often in opposition to the assumptions of our dominant culture – whoever’s in the White House. Therefore, we cannot travel alone. The way of love will require all of our gifts and all of the gifts of our traveling companions. It will require many gifts we do not have.

Jo Ann Robinson had strong administrative and organizational gifts. She worked tirelessly behind the scenes in organizing the Montgomery Bus Boycott, but she did not have the gift of public speaking. And so when a young preacher moved to town, she recruited him to be the public face of the boycott. Of course that preacher was Dr. Martin Luther King Jr., but Jo Ann Robinson, about whom most have never even heard, was the glue that held the Montgomery Bus Boycott together and ignited the civil rights movement.

And by the way, God not only uses our gifts and the gifts of our traveling companions. If we allow it, God even uses for good our brokenness, our failures, our epic disasters. Many of you graduating may not have experienced epic disaster. Yet. But I want to acknowledge that some of you have experienced disaster, loss, trauma.

Almost 20 years ago, I experienced a trauma that plunged me into a pit of depression. Even though I have experienced lots of healing and I live with a lot of joy, that depression still stalks me and occasionally catches up to me. But that experience also informs some of my responses and commitment to the women and men of the Recovery Café community. Nine out of 10 of the women and men who make up our community have suffered unimaginable trauma, and some have suffered one unimaginable trauma after another.

Throughout her childhood, Jenny was sexually abused by her older brother, resulting in her becoming pregnant at age 14. Her parents put her in a home for unwed mothers, where she was introduced to an array of illegal drugs by the other girls. After putting her baby up for adoption, Jenny spent the next 17 soul-scorching years addicted to heroin. As she discovered healing and stability in the Recovery Café community, she asked, “What gifts do I have that could be used for good, for a purpose greater than myself?”

One day, she burst into my office and, with enthusiasm, shared, “Killian, as an intravenous drug user, I was awesome at finding veins. I’m going to be a phlebotomist.”

You can’t make this stuff up. She enrolled in a medical technician program, and she graduated as the best in her class.

African American theologian Howard Thurman wrote, “There is something in every one of you that waits and listens for the sound of the genuine in yourself. It is the only true guide you will ever have, and if you cannot hear it because you are unwilling to sit still for long enough to hear it, you will all of your life spend your days on the end of the strings that someone else pulls.”

Third traveling tip: If we are to travel the way of love in resistance to fear, hatred and all forms of exclusion, we will need proximity to and mutually liberating relationships with those we are prone to view as “the other.” We will need to put our weight down with at least one group of people who are being left out.

One Easter Sunday when my daughters were ages 4 and 6, we were standing on the steps of our ecumenical church in Washington, D.C., about to go into the service when the godmother of the 6-year-old arrived and presented the 6-year-old with an Easter basket full of chocolate eggs. Well, it took only a few seconds, but when Phoebe, the younger daughter, realized this friend had not brought an Easter basket for her, she began to wail loud enough to resurrect the dead. Fortunately, I had just completed an eight-week parenting class. So I dropped to one knee in order to establish eye contact and, in an attempt to validate her feelings, I said in my most empathetic voice, “Phoebe, you’re feeling left out.” To which 4-year-old Phoebe screamed, “I’m not feeling left out; I have been left out.”

A heartbreaking number of people have been left out and do not have what they need in the way of housing; physical and mental health care; education; employment; equal protection under the law; and basic human rights.

In 1994, during the very violent last year of apartheid, our DC community spent time in South Africa with a community made up of a handful of whites from Johannesburg and a handful of blacks from Soweto who had moved in together on a farm to live in defiance of their country’s segregation laws, which literally left out 80 percent of the people in the country. One of the members of the community explained to me, “South Africa has lots of activists who want to end apartheid and they work for justice. That activism is important,” he said, “but many of them do not have one single authentic relationship that crosses a racial or socio-economic barrier. They do not have one authentic relationship with someone who has been left out.”

Authentic relationships are what change us and what will change our world. Which brings me to the final traveling tip: If we are to travel the way of love and live in awe of the divine in every living being and in all of creation, we must practice dying before we die. Jesus taught that unless a seed falls into the ground and dies, it cannot produce new life. It cannot produce fruit that will last.

So we must learn to die constantly in this sense: Our egos or false selves are always looking for ways to build ourselves up, to protect ourselves, to promote ourselves, to acquire privilege and power for ourselves. Even at the expense of others. Our egos – our false selves – are always consuming more and more of what doesn’t work and will never, ever satisfy our deepest longings.

Bob was another member of Recovery Café who survived a traumatic childhood. Out of a deep hunger for belonging, he left home when he was a teenager and joined a violent gang. He had tattoos all over his body proclaiming his association with that gang. And he ran with that gang proudly for 15 years. When he arrived at Recovery Café, he was no longer proud. He was nearly beaten to death.

He began showing up every day, allowing himself to be deeply known and loved. With the help of a therapist, he dug into the trauma of his past. He also went through the painful process of having all of his tattoos removed for fear that someone from his former gang would recognize him and kill him.

After showing up at Recovery Café every day for six months, he casually said to me, “Killian, I turned my gun into the police this morning.”

“The one I’ve had strapped to my leg every day I’ve been here. For six months,” he replied.

He then went on to say, “I’m beginning to understand that true security doesn’t come from anything external; true security comes from within.”

Traveling the way of love involves turning in your gun. Whatever our gun may be. It involves turning inward to discover our true identity, which is love, and then living our lives from that place of divine love in us for a purpose far greater than ourselves.

So, Demon Deacons, Class of 2017, my prayer for you is that you become lifelong midwives so that you can help birth a world where everyone belongs and knows the wonder of their worth.

Thank you so much for listening.