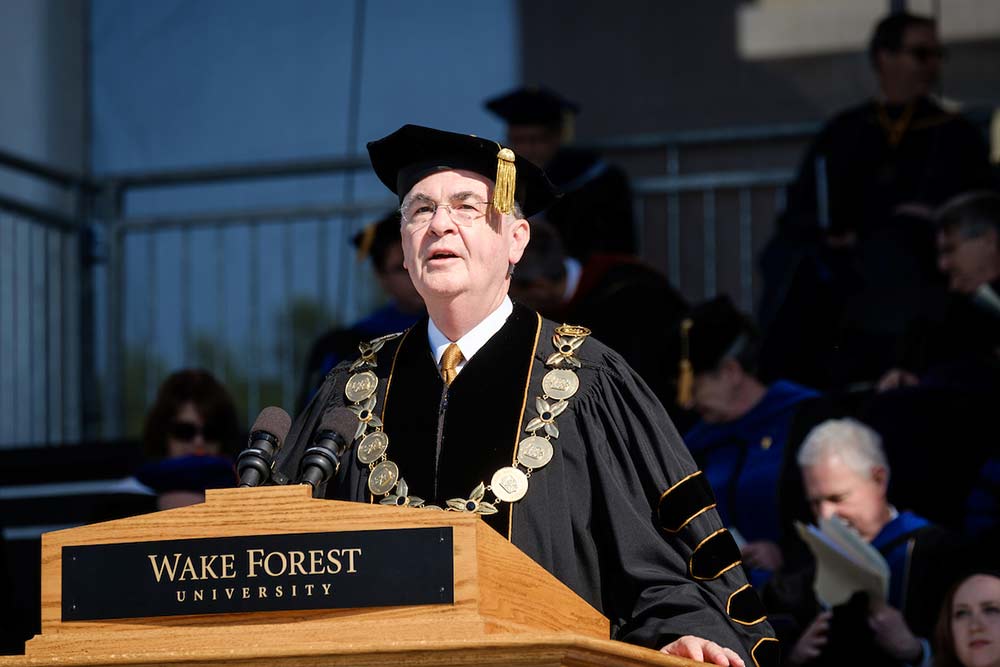 I think the most striking of these paintings is “Freedom of Speech.” The setting in the summer of 1942 is a town meeting in Arlington, Vermont, where Rockwell was a new resident. The Town Counselors had announced their plans to build a new school. Only one resident, Jim Edgerton, objected to the proposed building, and during the evening’s proceedings, he rose to speak. Edgerton was a young, working class man, with rough hands, plaid shirt, and stained jacket. Other more respectable citizens of the town surround him – men in coats and ties, a woman in a hat. But there we see Jim Edgerton rising to speak to express his opposition “standing tall, his mouth open, his shining eyes transfixed, he speaks his mind, untrammeled and unafraid.”

The journalist Bob Greene recently commented that the power of this painting is in the eyes, his eyes and the eyes of the audience. Their eyes are focused upward, toward him, almost in reverence. They have given even this dissenter their rapt attention.

My theme today is eye contact: only when we look each other in the eye can we begin to solve our problems.

Augustine said that eyes are windows to our souls; and Descartes argued that there is no passion that some expression of the eyes does not reveal. When someone’s mood is upbeat, we might note they look bright eyed or have a twinkle in their eye. When discouraged, that they have a mournful gaze or downcast eyes. All of us have seen eyes ablaze with anger, or eyes that look up in reverence, or eyes that are wide with fear. Darting or shifty eyes may suggest an untrustworthy person. A disengaged person has a blank look. Eyes in many ways are mirrors of what is going on inside.

Sometimes, eye contact can be deeply personal. Have any of you ever had a special connection that began with the eyes? It happened to Julie and me in college. After working in a youth program in Chicago during the summer of my junior year, I was describing it to a couple of dozen students. As I was speaking, my eyes caught those of another student, Julie Gregg, and somehow that gaze awakened something in both of us. Afterward, we sought each other out and that began what became a wonderfully rich and lifelong relationship.

Eye contact is also a main way we connect with other people and learn empathy. It is true that some people, for physical or psychological reasons, cannot use eye-contact as a vehicle of communication and that for others there are cultural constraints about certain kinds of eye contact. Yet for most of us it is essential. Modern psychologists suggest that making eye contact is the most powerful mode of establishing a link between humans.

This is true even for newborn babies who instinctively lock eyes with their caregivers. Three-month-old infants smile less when an adult averts their gaze and begin smiling again when eye contact is resumed. Children need eye contact to develop parts of the brain that are involved with attachment.

For adults, eye contact plays an equally important role in human connection. It is only eye contact that fully actuates those parts of the human brain that allows us to process another person’s feelings and intentions. Northwestern Medical School found that patients of doctors who made more eye contact had better health outcomes and adhered more to medical advice. Another study found that an increase in the amount of eye contact generated by a speaker significantly increases that speaker’s credibility.

Yet we live in a day when eye contact seems to be on the wane. I note this walking across campus, standing in an elevator, sitting in Starbucks, waiting in a hotel lobby, or riding on a bus or train. Everyone is together, but strangely alone. People are looking down at their smartphone screens rather than catching each other’s eye to strike up a conversation. The question is whether we are losing some of our ability to connect deeply.

Evidence suggests that our always-on life is, in fact, eroding our capacity for empathy. One study found a 40 percent drop in empathy among college students in the past 20 years, a decline the author suggests is due to students having less direct face-to-face, eye-to-eye contact with each other.

Our friendships, and even our sense of identity, is becoming virtual rather than actual. We tweet, Facebook and Snapchat with more people than ever before. But what does that mean? As Stephen Colbert asks, “Don’t all these little tweets, these little sips of online connection, add up to one big gulp of real conversation?” Evidence suggests not. Facebook posts consistently present an image of ourselves more attractive and interesting than we really are. People project a veneer and conceal much about themselves. This is not an encounter, eye to eye, soul to soul.

Face-to-face relationships are different. They are full, rich, and demanding. They require caring. I must go beyond myself to take interest in a friend, to look him or her in the eye, and explore what is there. In conversation, we are called upon to see things from another’s point of view. We are forced to rethink cherished assumptions. We are not completely in charge. When we see each other’s faces, we become most human to each other.

All of this applies to the deeply polarized age in which we live. It is easy to condemn or ridicule someone you have never met. It is easy to belittle someone if you don’t see them. It is far more difficult to look someone in the eye and find out what they really think and why they believe the way they do.

Wake Forest has long been a face-to-face place, a community that links personal connection and intellectual engagement. As you leave this campus, and pursue a wonderful array of opportunities, I challenge you to lift your eyes to engage your fellow employees, your fellow graduate students and professors, your clients, your colleagues, and, most importantly, your friends. Do not take for granted the importance of deep human connection.

By emphasizing eye contact, I am advocating strong interpersonal relationships in a fast-paced and increasingly impersonal world. We need eye-connected communities at work, in churches, synagogues and mosques, and in the civic arena. That is the only way that people can bridge their real differences. Eye contact, and the mutual respect and trust it can bring, promises that at least, on some issues, people of good will might learn to see eye to eye.