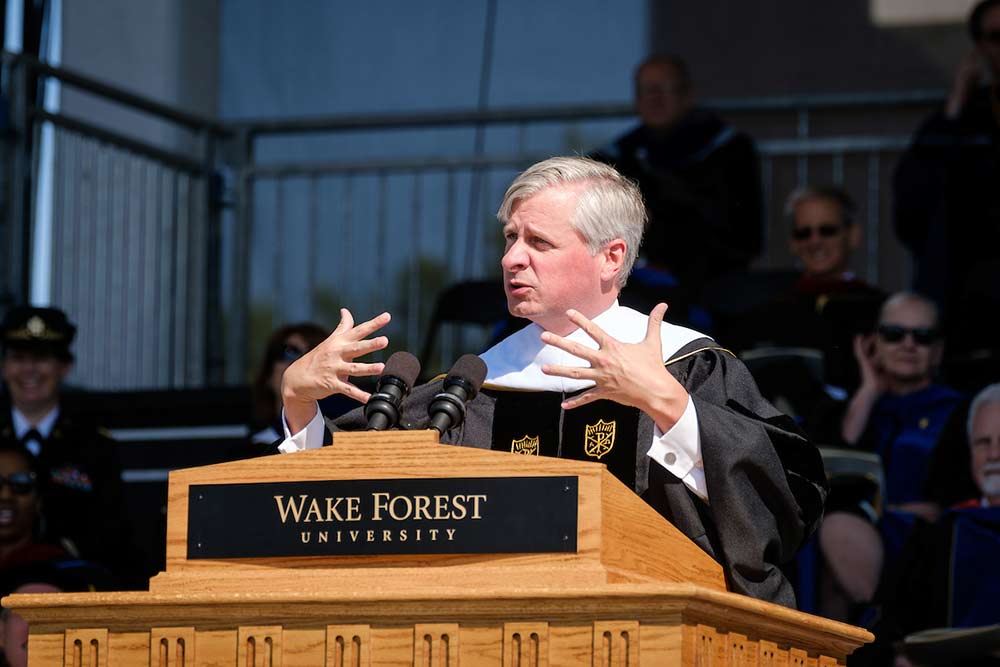 Remarks as given by historian Jon Meacham to the Wake Forest graduating class May 15, 2017.

When I was listening to Provost Kersh say those nice words about me, I was tempted to think, “Well, yeah, I think that’s about right. He’s about got it.”

My mind went back quickly – it was about eight years ago – to the National Book Festival on the Washington Mall. I was on my way to give my talk about Andrew Jackson, and a woman ran up to me, which doesn’t happen enough as a basic rule. It had actually never happened before. She ran up and said, “Oh my God, it’s you.” And I said, “Well, yes.” Existentially speaking, that’s hard to argue with. You’ve got to love an audience in which you can use existential as an adverb. Well done. That’s a liberal education. That’s what you all are paying for.

She said, “Will you wait right here? I want you to sign your new book.” I was standing there thinking life was exactly as it should be. Women are running up to me. They’re recognizing me. They want me to sign a book. I was thinking that everything was really clicking. Swear to God. She brought back John Grisham’s latest novel.

So whenever I think I have life as I want it, I remember that somewhere in America, there is a woman with a forged copy of The Runaway Jury.

And he, by the way, is much taller and much richer.

You are finishing your years here in a remarkable moment in the life of the American republic. You may have noticed that. People will be discussing the events of the current age as long as the English language is spoken in any corner of the globe, as Winston Churchill once said. It is an hour of promise and of peril, of possibility and of risk. And it is, in other words, a wonderful and even a wondrous moment to be embarking on lives of enormous consequence.

I am, as you may have heard, an historian, and so I’d like to take our brief time together to reflect on what the past, which can seem so remote, can tell us about the present and the future. A quick spoiler alert: It has everything to do with who we are and what we will become, for good and for ill.

Remembrance lies at the heart of our common enterprise. The song of the aged Moses probably said it best: “Remember the days of old. Consider the years of many generations. Ask my father he will show me. Ask my elders and they will tell me.”

We look back in order to summon the strength and courage to move forward. We do this collectively as a nation and we do so in our individual lives. History and tradition are not infallible, but we have nowhere else to begin our deliberations about what we should do except for the fact of what we have done.

And so my counsel to you is to try to make history your ally, nor your enemy. It has been said that history is to a nation as memory is to a person, and while memories are sometimes painful and sometimes debilitating, experience proves the past is a stubborn thing and as inevitable as the weather. As William Faulkner once remarked, the past is never dead; it isn’t even past. It is a conversation between the living and the dead with the goal of improving the lot of those yet unborn.

Liberally educated people – people like you – form the sure foundation of that ever-changing, ever-challenging conversation. To know we have met seemingly intractable problems in ages past and have overcome them should give us hope for many years to come.

Now the world has already turned over many times since you have been in it. Many of you were born in the middle of the 1990s, which, come to think of it, means I have shoes older than some of you. It was the third year or so of the first term of President Bill Clinton. The Dow Jones Industrial Average was at about 5,000. A gallon of gas cost $1.15. Mark Zuckerberg turned 11. New TV shows included Star Trek: Voyager and CNBC’s Squawk Box, which, if you don’t watch it now, you soon will.

This is the year that gave us movies like Braveheart, Toy Story, The Usual Suspects, Die Hard With a Vengeance, Grumpier Old Men and a classic you might remember, Mighty Morphin Power Rangers: The Movie.

You were just about to begin elementary school when terror struck us out of a bright blue sky on Tuesday, Sept. 11, 2001, and for well over half your lifetimes – a remarkable thing to contemplate – the United States of America has been at war. That’s something that can only be said of the very first generation of Americans in the late 18th century. You were in middle school when the first African American became president of the United States. And you were students here at Wake Forest when the most unconventional major-party candidate in American history won the highest office in the land.

You know what history feels like and you’ve already lived through a fair chunk of it. And you know at least implicitly that the world is going to turn over again and again until what Faulkner called the last red and dying evening.

The great fact of America today is pervasive partisanship. Too many of us are given to reflexively reacting to whatever unfolds in the public square – not according to our reason but to our ideological and even tribal predispositions. Now I want to be very clear about this. Partisanship is not an intrinsically bad thing. The middle way is not always the right way. It’s in the nature of things and in the nature of human beings to hold fast to views and allegiances, to heroes and to creeds, to the exclusion of other views and other allegiances, other heroes and other creeds. Such is politics, which is both an emotional and a rational undertaking. What is worth avoiding, however – and too many of us are doing too little to avoid this – is reflexive, as opposed to reflective partisanship.

The point of America is not for all of us to agree. That is impossible and undesirable in any event. Autocracies are about total agreement. Or at least total submission. The American republic is founded on the notion that even the person with whom I most stridently disagree may have something to say worth hearing and heeding and that the only way I can figure out whether that’s the case is by listening to that person and by weighing the relative merits of what is said and then –only then – making up my mind.

The danger – and this is all too pervasive at the moment – lies in my reflexively dismissing a point made by a person simply because that person is the one making the point. That’s a foreclosure of reason. I’d argue that’s a sin because the human capacity for judgment – however flawed, however fallen – is the great gift that distinguishes us above the beasts of the field and the trees of the forest and the creatures of the sea. So I beg you, truly: Be reflective about our public life. Make up your mind based on facts, not alternative facts or alternative evidence.

Be open to the very real possibility that you might be wrong from time to time and people you thought were beyond redemption might be right.

There is no shame in this. Foolish consistencies, as Emerson reminded us, are the hobgoblins of little minds. Be broad-minded and big-hearted and courageous. The shame only comes when we take refuge in unjustified certitude rather than a fearless openness of mind and of soul.

And Lord knows we need more courageous minds and souls.

If we are being honest with ourselves at all, we know we live in a time of division and self-absorption. As President Hatch pointed out, we stare at screens. We filter news through our ideological dispositions. We offer reflexive opinions without thought but with increasing fervor. And our common welfare depends not on what separates us but what unifies us. St. Augustine defined a national as a multitude of rational beings united by common objects of their love. The common objects of our love.

So nearly 250 years after the founding of the United States in a Philadelphia summer, what do we love in common? The painful but unavoidable answer is not enough. Yet we must find a way forward, and I think we will do so, in my view, by consultation with the past.

History – for all its complications – has the capacity to bring us together, for the story of the American journey is ultimately the story of obstacles overcome, crises resolved and freedoms expanded. We have always grown in strength the wider we have opened our arms and the more we have opened our hearts. From Lexington and Concord to Lewis and Clark; from Fort Sumter to D-Day; from suffrage to Selma, we have sought to perfect our Union. And the knowledge that Americans at home and abroad have struggled and sacrificed and fought for the good, opposing totalitarianism and seeking to expand the vision of human rights enshrined in Jefferson’s immortal – if incomplete – Declaration can itself be a common object of our love.

Curiosity, which has brought you this far, will serve you well in the farther reaches of your journey. You’ve already begun here to engage in what Matthew Arnold called the best that has been thought and said in the world. From mathematics to Mozart, from political history to the basics of physics, a liberal education like Wake Forest’s offers us a way of knowing and thinking. And the affairs of the world have never been as global in nature as they are today. Borders have never been meant so little since the first gazelle loped across the first savannah.

You are leaving Wake Forest as citizens of the most powerful nation in the history of the world. And that is not hyperbole; it is fact. For more than 70 summers – since, really, August of 1945 – America has been greater than greater than Rome ever was and greater than Britain. But as we know, Earth’s proud empires rise and fall. Such is the nature of the things of this world. The nation you’re about to lead requires innovation and energy and creativity. And because of this place and because of what you have learned here and because of the friendships you have made, you are uniquely prepared to take up the responsibilities that await.

So just a bit of sundry advice from my middle age to your youth:

You all are about to make history and the rest of us can’t wait to see what you do with your hour upon the stage. It will be fantastic. And the stories you will write in your lives and in the life of the nation and of the world will be stories not of fear but of hope, stories not of despair but of joy, stories not of darkness but of light. Nourishing, transcending light. That is America’s story, and it will be yours, too. Godspeed.