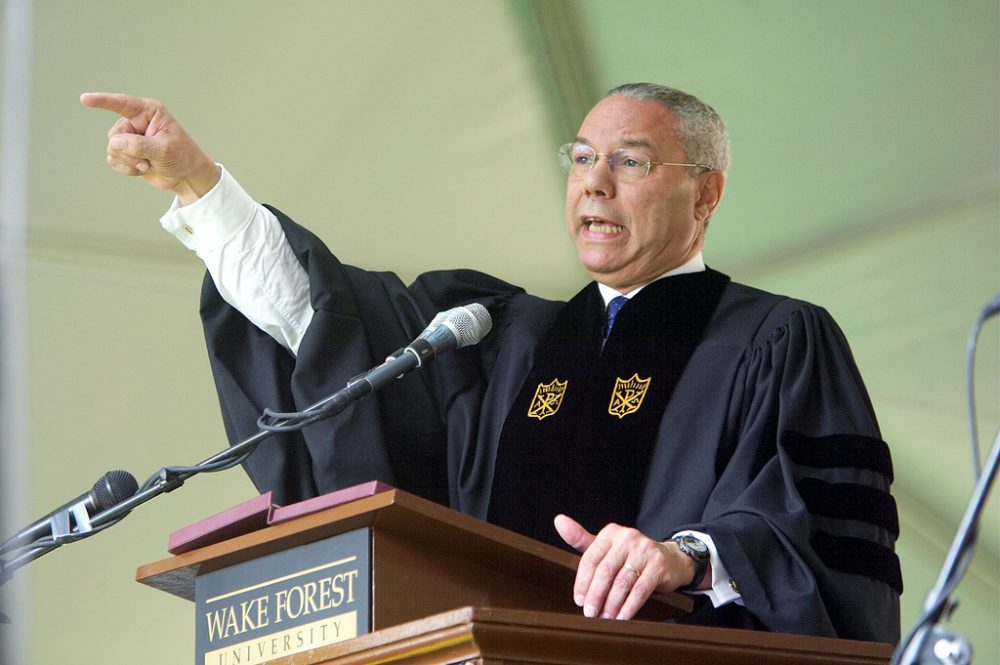 In his first Commencement address since becoming Secretary of State, Colin Powell told approximately 1,600 graduates at Wake Forest’s Graduation Monday morning to “do the right thing,” a concept that applies to their personal lives as well as the challenges facing the United States today. “Moral clarity is a necessary first step for dealing with complexity. We have to know what we are for. We have to always know and do the right thing,” he said.

“Wake Forest has prepared you with a quality education … that will never be lost, and taught you the value of service,” Powell said in his twenty-minute address before an estimated crowd of 15,000 on the University Plaza. “You’ve been taught to work for goals that transcend the individual: service to community, service to country, service to mankind. Your motto, ‘Pro Humanitate,’ says it all. Never forget it. And never forget the obligation those two words place upon each and every one of you and place upon your heart. Use a goodly portion, a very goodly portion of the time and talent you have, and the treasure you will surely accumulate, to serve others. Give back and you will find that you will receive back in many measures.”

“Set internal standards of excellence and behavior. Do the right thing when no one is watching. You will always know,” said Powell, who later received an honorary doctorate of laws degree and remained on stage to shake the hand of each undergraduate as they received their diplomas. He also participated in the ROTC Commissioning Ceremony.

Powell opened his speech with humor, saying he “might even roll the Quad,” and closed with “Party on, Demon Deacons!” But he spent most of his address talking about the importance of individuals and nations doing the right thing. Noting that he had just returned from the World Economic Forum in Jordan, he said he spent much of his time there dealing with the fallout from those who had not done the right thing.

“We have deep disappointment and pain over some of our soldiers not doing the right thing at a place called Abu Gharaib (prison).” But, Powell added, one soldier had done the right thing by reporting the abuse of Iraqi prisoners and the United States will now do the right thing. “We want the world to watch what a nation of values and character does to right this kind of wrong. The world will see that we are a country with a moral code that defines our national character.”

Powell saluted the “tens of thousands” of soldiers putting their lives on the line in Iraq and pledged that “our troops will succeed because they are doing the right thing.” He also addressed the need for peace between Israelis and Palestinians and the need for economic and political reform in the Arab world. But the greatest challenge facing the world, he said, is the spread of HIV-AIDS.

Powell said the graduates have a “powerful combination of competence and character” provided by Wake Forest and their families and closed by encouraging them to “dedicate part of your life to service to others. Your only limitations are your dreams. Dream large.”