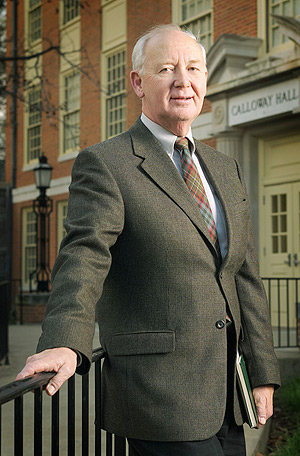 In 1966, after earning his doctorate at the University of Wisconsin, John Baxley swallowed the disappointment of his thesis advisor — who believed he was wasting his career by not going to Stanford or Cornell — and went to teach at Duke University. He quickly realized that Duke was not where he wanted to be, and two years later, to the chagrin of his advisor, he joined the mathematics department of a small school called Wake Forest.

It took courage for Baxley, a Wake Forest Professor of Mathematics who retired this spring, to choose his path. But, Baxley was impressed with what he saw in Wake Forest.

“People at Wake Forest had the courage to take a stand, and I liked that,” he said. “The Wake Forest I came to was not bragging about their research capabilities, but they were bragging about how they played a major role in the state by challenging the thought and issues of the day. I think North Carolina was more open and progressive back then because of it,” remembered Baxley.

Baxley believes that Wake Forest’s progressive atmosphere is what gave him the courage and freedom to become what he is today. He said he was never “prostituted by the system.” He did not have to be a teacher of mathematics, nor did he have to be a research mathematician. He pursued, and became, the hybrid — what he calls a “teaching mathematician.”

Baxley claims that he has achieved nothing out of the ordinary throughout his thirtysix-year career. He has served on scholarship committees, been a faculty marshal for twenty years, and befriended and advised new faculty members. He says he has just done what he loves best — teaching and doing mathematics. But, colleagues and students think otherwise; they insist that the accomplishments of this quietspoken man are quite remarkable.

Elmer Hayashi, professor emeritus of mathematics, said Baxley was instrumental in getting him to Wake Forest. “He convinced me that it was the place for me to be. My wife and I were concerned about going to North Carolina because of the stereotype of the South. But, John reassured us that we wouldn’t encounter a lot of prejudice at Wake Forest, and it proved to be true.”

But what has been even more extraordinary about Baxley’s research success, according to Carmichael, is his unusual practice of co-authoring research papers with master’s thesis students and even undergraduate students. Baxley wrote his first student-collaborative paper in 1977 with Sarah Edwards Brown (’76, MA ’77). Over the next ten years, he published that paper and wrote two more with two other students. Baxley says it was not until 1990 that he “finally figured out how to do the process

well,” and since then, he has tackled the work seriously and co-authored over a dozen papers with students — amounting to more than 50 percent of his research.

“It’s not unusual for professors to co-author papers with students at the doctoral level,” said Carmichael. “Master’s students, though, aren’t at the level of being researchers, yet John is able to tap into their talent and get them to help do research on ideas for which the answers are unknown.” Baxley’s colleagues at mathematics conventions have been mystified when they find out about his work with master’s students. “How do you do it?” they ask. “Well … they come to my office and we work,”Baxley answers with a shrug.

Baxley is genuinely modest about his research success, but both his colleagues and students recognize that his contagious enthusiasm for mathematics and his unflagging commitment to his students are gifts. “He embodies the true teacher/scholar role,” says John Moorhouse, Carroll Professor of Economics. The University apparently agreed, and in 1997, Baxley was honored with a Wake Forest Professorship.

Students have been the adrenaline flow and lifeblood of Baxley’s career. “We establish a mathematical bond which is very real and leads to a strong affection. When my students leave, they take a part of me with them, but they also leave a part of themselves with me. It is this tie that means the most to me.”

Several former students are grateful for what Baxley left with them. “Dr. Baxley was the main reason I had the confidence to pursue a Ph.D. in mathematics. I owe him my career,” said John Nardo (’92). Richard Chapman (’86), Baxley’s second research student, said, “Dr. Baxley taught me how to gamble. He taught me how risky research is and what was involved in making bets in a research career.” Although their paper was not published until seven years after they wrote it, Chapman said Baxley’s determination to see it published ultimately helped him achieve tenure.

Surprised that Baxley approached her at all about doing research, Cindy Neff (MA ’01) is thankful for the experience. “I thought he would want to work with someone interested in doing research in their future. He knew I was going to teach algebra. But he still pursued me, and he was so excited about math! That’s the one thing I definitely took away from him — his enthusiasm. I try to bring that same excitement and enthusiasm into my class,” she said.

Baxley’s teaching contributions have been written on the hearts of his students. But, the one contribution he has made to Wake Forest that he hopes will last long after he is gone is the mathematical economics major. He and Moorhouse created the program in 1975, and Baxley is proud of the fact that it was not only one of the first of its kind in the country, but it also has never required any University fundraising since its inception.

Every year since 1978, eight to twelve students have graduated from the program. Many of those students have gone on to graduate schools such as the Massachusetts Institute of Technology, the University of Chicago, and Northwestern University.

“It is no exaggeration that we would not have the joint program today if it hadn’t been for John. Most mathematics professors don’t understand the level of math needed in economics. But, John was open to our needs and was willing to convince his colleagues that this was a solid venture,” said Moorhouse.

Baxley’s career has now come full circle, but he looks back with satisfaction. Wake Forest gave him courage. He took that courage and gave it back — day after day, year after year, through the ordinary and through the remarkable. According to Moorhouse, Baxley has been one of those rare professors who will leave his mark on the institution. “Not all of us will change the University, but he certainly has.”