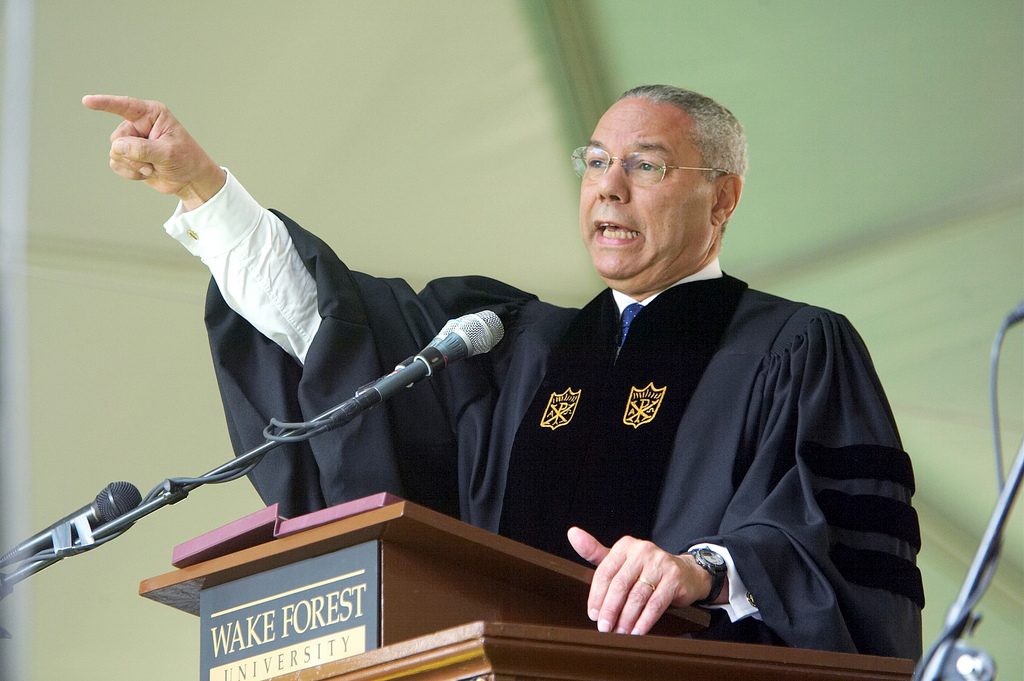 In his first commencement address as U.S. secretary of state, Colin L. Powell interspersed national policy with advice for Wake Forest University’s 1,597 graduates. Powell said the impulse to do the right thing should apply to both individuals and nations.

Powell gave the university’s 162nd commencement address during the 9 a.m. outdoor ceremony on the university’s main Quad. The crowd of approximately 20,000 friends and family welcomed Powell with a standing ovation as he walked down the center aisle and responded with laughter and applause throughout the 20-minute speech.

Powell, who had just returned from a weekend trip to Jordan, opened his address with an observation of the beautiful North Carolina morning and pleased the crowd with the mention of “rolling the Quad,” a university tradition following athletic victories. He told graduates to arm themselves with morals, using recent world events to illustrate the importance of doing the right thing.

“When people are suffering, and you can help them, you help them,” Powell said. “You act. You do what’s right. That’s the American way. Whether it’s fighting poverty, disease or hunger, or whether it’s fighting terrorism or rogue regimes, we are determined to lead our nation, this administration is, in always doing the right thing.”

Powell acknowledged that the United States is going through a period of deep disappointment and pain as a result of the actions of a few soldiers at Abu Ghraib prison in Iraq. However, he assured the crowd that America will do the right thing in dealing with the situation.

“Watch what a nation of values and character, a nation that believes in justice, does to right this kind of wrong,” Powell said. “Watch how a nation such as ours will not tolerate such actions.”

Powell said the university’s motto, “Pro Humanitate,” (for humanity) has taught students to work for goals that transcend the individual.

“Never forget the obligation those two words place upon each and every one of you and place it upon your heart,” he said.

The university awarded Powell an honorary doctor of laws degree during the ceremony. Following his address, Powell shook hands with the more than 900 undergraduates as they received their degree, and he commissioned the university’s 15 ROTC cadets.

Powell charged graduates to go forth inspired and blessed by teachers, family and peers.

“Go forth to perform your duty to protect this nation’s honor and to help it become a still more perfect union,” he said. “Go forth in the certain knowledge that all you will eventually leave behind are your good name, your good works, and the blessings of your children.”

Powell acknowledged the 50th anniversary of the landmark court case Brown v. Board of Education, saying that without the 1954 decision he would not be where he is today.