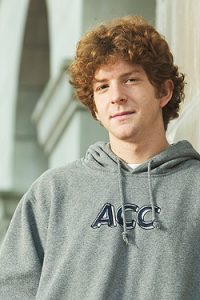 Undergraduate honors and awards were presented by academic departments and the Calloway School of Business and Accountancy during the College Honors and Awards Ceremony on May 14. Winners of the two most prestigious awards, the Carlton P. West Phi Beta Kappa Award and the William C. and Ruth N. Archie Award were kept secret until the program.

The Phi Beta Kappa Award, recognizing the College’s top graduate, was presented to Todd Ryan Martin, a computer science major from Eden, N.C. The award is given annually to the graduating senior with the highest academic average.

The Archie Award was presented to Grey Malone Ballard, a math and computer science major from Elkin, N.C. That award is presented to the senior who has most demonstrated a commitment to liberal learning, scholarship, and the ideals of Wake Forest College.