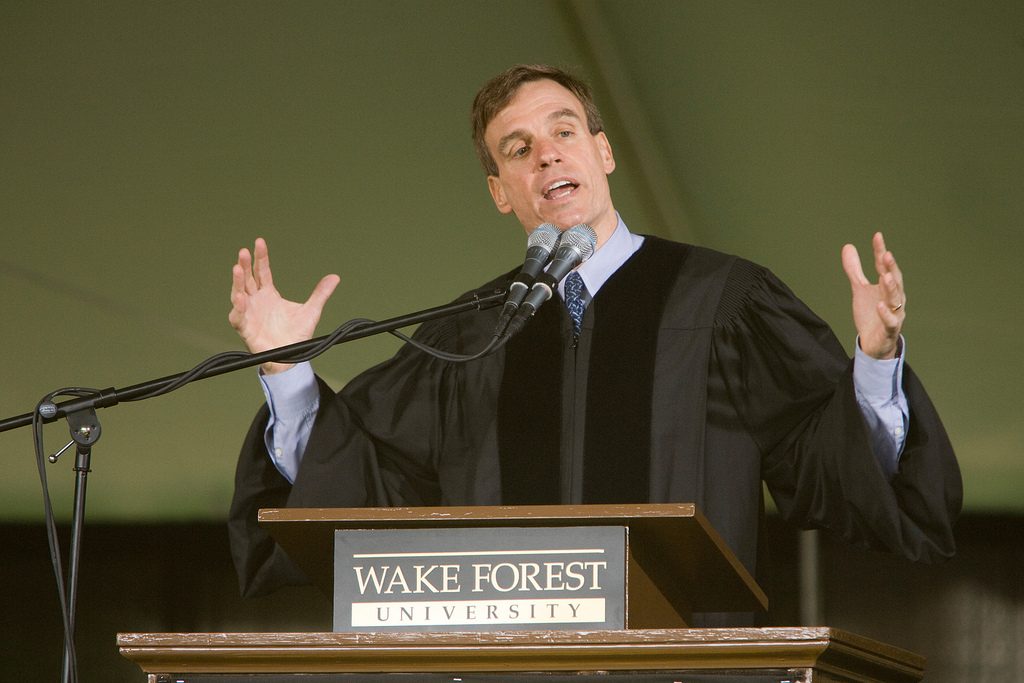 Former Virginia Gov. Mark Warner urged Wake Forest University graduates during their May 15 commencement ceremony to take risks without fear of failure and to engage in civil and respectful political debate while eschewing cynicism. A former cell phone executive, Warner also drew laughter from the crowd when he reminded graduates to call their mothers.

Warner gave the university’s 164th commencement address to 1,583 graduates during the 9 a.m. outdoor ceremony on the university’s Hearn Plaza (the Quad). More than 15,000 friends and family of graduates attended the event, which was Wake Forest President Nathan O. Hatch’s first as president of the university. Hatch, one of the most influential scholars in the study of the history of religion in America, became president of Wake Forest in July 2005. He was inaugurated during an Oct. 20 ceremony in Wait Chapel.

Described in a March 12 cover story in The New York Times Magazine as “the bright new star in the constellation of would-be candidates” for president of the United States, Warner received loud applause from the audience when he encouraged people to politely and respectfully debate the issues of the day without impugning the patriotism, compassion, religious sincerity or motives of others.

“Turn on the TV,” Warner said. “Listen to the radio. Click on almost any (Web log). And, you’ll see what I’m talking about: personal and partisan attacks, complex issues reduced to easy-to-digest sound bites, and way too much cross-fire and not nearly enough cross talk.

Warner, a Democrat who served as Virginia’s governor from 2002 to 2006, left office in January after one term because Virginia state law limits governors to serving non-consecutive terms. According to the Times magazine article, Warner’s “80 percent approval rating when he left office (in Virginia) made him one of the most adored governors in the state’s history.”
Although he has yet to decide if he will run for president, the story states that, “Warner is being mentioned near the top of every list of candidates vying for the (Democratic) nomination in 2008.”

He told Wake Forest graduates during the commencement ceremony that the challenges faced by the United States are too great for name-calling or superficial debate. Warner outlined several of the country’s challenges, including a diminished stature in the world, the threat of global terrorism, the hyper-competitiveness of the global economy, dependence on foreign oil, global warming and massive budget deficits.

“To turn these perils into promise, to reap the huge potential of this interdependent world, we do need people who are passionate in their beliefs, dedicated to debate, but committed to … forging consensus in the best traditions of our nation.

“As graduates of Wake Forest, you are perfect candidates for this job. You are equipped to enter the public arena, as a concerned citizen, as an informed citizen and as a community leader.”

“The diplomas that you will receive today are by all statistical measures tickets to a better life,” Warner said. “I know; I’m the only member of my family to ever graduate from college, and I have been able to do things and go places that my parents only dreamed of. But, there is a price for this ticket – and I don’t mean the interest on your student loans. The price of this unparalleled opportunity is the responsibilities that will come with a world-class education.”

Warner drew from his experiences as an entrepreneur with early business failures as he told graduates not to fear failure because the entrepreneurial spirit is what makes America unique and drives science, scholarship and the economy.

A key figure in the telecommunications industry in the 1980s, Warner became a founding partner of Columbia Capital Corporation, a venture capital fund that started more than 50 telecommunications and information technology companies. As a pioneer in the field of wireless communications, he was a co-founder of Nextel Communications.

When outlining his charge to the graduates to feel a sense of responsibility to those who helped them reach graduation, Warner challenged the students to be honest about the fact that they did not make it alone.

“You may be scared about what happens next,” Warner said. “So are your parents. You may not know where life’s going to take you. But right now, you know who helped get you here. That’s why after this ceremony you should find that special person and say thank you. Tell them you love them. It will make them feel good. It will make you feel good as well.