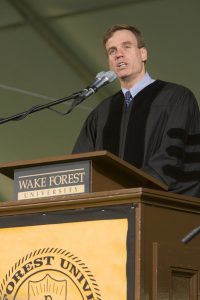 President Hatch, Mr. Orr, members of the Board of Trustees, faculty, parents, friends, and graduates-thank you for that very kind and warm welcome. Now, President Hatch, you were very kind in that introduction. You did neglect to mention one thing in that introduction though: after four years of hard work, I’m currently unemployed. Sound familiar?

I’m very honored to be with you today at this historic commencement. It was 50 years ago, this year, that Wake Forest moved to Winston-Salem. Now, being from a state with two ACC teams, I can really appreciate the desire to move as far away as possible from UNC and Duke.

But, the real history being made today is not the history of this institution, but in the lives of you, the graduates of the Class of 2006. You took the exams, wrote the papers, spent the late nights in the library. And now, Class of 2006, you made it! For that, you should be very proud.

Now, in preparing for today’s speech, I thought back to my own graduation from George Washington University in 1977. I tried as hard as I could to remember what the commencement speaker had said. I racked my brain. I had my staff go back and check it out. Then, it dawned on me: I was the commencement speaker back in 1977 at my graduation. Yes, the speech was that memorable. With that in mind, I will try to follow Winston Churchill’s sage advice: “Be clear. Be concise. Be seated.”

But, there are a couple things I want to share with you. The diplomas that you will receive today are by all statistical measures tickets to a better life. I know; I’m the only member of my family to ever graduate from college, and I’ve been able to do things and go places that my parents only dreamed of.

But, there is a price for this ticket-and I don’t mean the interest on your student loans. The price of this unparalleled opportunity is the responsibilities that will come with a world-class education.

First, there is an obligation to yourself: don’t be afraid to fail. Now, parents, don’t have a heart attack. I know that sounds strange-particularly at a time in a society that glorifies success at all costs. But, for me, the most important lessons I learned in my life came from failures. So, I hope, graduates, you will be brave, be daring and be courageous.

This is the spirit which makes America unique. Our insatiable desire to push the boundaries of what we know and what we can do is what propels our science, our scholarship and our economy.

I know; it can be scary. I’ll often remember … after college, I went to law school and a year or so after law school, I decided I would become an entrepreneur. So, I took my life savings — $5,000 — invested in a little energy start-up company. I went to work for that company and, in six weeks, in six weeks I helped that company go totally broke.

I then went into real estate. It took me six months to fail at that. So, at the ripe old age of 26 — student loans coming due — was living out of my car — sleeping on the couches of my law school classmates. This was back in 1982. A new friend told me about a new industry starting up called cellular telephones. I’ll always remember my law school classmates saying to me, “Warner, you’re so crazy. Go get a real job. Nobody’s ever going to want a car phone!” They’re still practicing law. So, I fell into that industry and ended up co-founding Nextel.

The same approach I took in politics. President Hatch was kind enough to mention about my tenure as governor. It was not my first try at elective office. Back in 1996, I ran for the United States Senate in Virginia against John Warner. My name being Mark Warner — that managed to confuse the heck out of everybody in the state. The best thing that came out of that campaign, and this was kind of the level of our political strategy, we had a bumper strip that simply said on it: “MarkNotJohn.”

Now, honest to God, in Danville, Virginia-right up the road a little bit-one day someone saw me as I was campaigning hard, saw that bumper strip and said, “Excuse me, sir. Is that a biblical reference?” Well, there was no divine intervention, and I got the silver medal. But, I learned again from that failure, and it helped me dramatically when I ran for governor a few years later.

Being able to fail, pick yourself up, wipe off the dust, and get back into the game is what is uniquely special about our country. Never forget that we need to take risks, and yes, if you take those risks, occasionally you’ll fail, but it can and should lead to greater success.

Second, beyond that responsibility to yourself there is a responsibility you will have to your community-a basic obligation that all of us who live here have, but unfortunately, too few take seriously. And that’s to conduct our political debates in a civil and respectful manner.

Turn on the TV. Listen to the radio. Click on almost any blog. And, you’ll see what I’m talking about: personal and partisan attacks, complex issues reduced to easy-to-digest sound bites, and way too much cross-fire and not nearly enough cross talk.

It’s no wonder that Americans are so alienated, cynical and distrustful of the basic institutions of government. In this age of amazing technological achievement, we have become better connected, but more divided. In this iPod age, we are finding it harder and harder to look beyond the “I.”

At this time in our nation’s history, we can hardly afford such a stilted discourse and shrill civic culture. The challenges we face now — challenges that you will have to contend with-are too great for name-calling and superficial debate.

America’s diminished stature in the world and global terrorism, the hyper-competitiveness of the global economy, our dependence on foreign oil which threatens not only our nation’s security but adds to global warming, and the massive budget deficits that undermine our ability to meet these challenges. Each of these problems are like snowballs rolling down the hill each picking up their own momentum. Any one of which, if we get wrong, could be a major national catastrophe. Unfortunately, all of these problems are approaching us simultaneously. To turn these perils into promise, to reap the huge potential of this interdependent world, we do need people who are passionate in their beliefs, dedicated to debate, but committed to foregoing and forging consensus in the best traditions of our nation.

As graduates of Wake Forest, you are perfect candidates for this job. You are equipped to enter the public arena, as a concerned citizen, as an informed citizen, and as a community leader. So, no matter how many days and how many miles separate you from your time here at Wake, never forget what you learned here.

Reject the cynicism and shallow posturing that dominate our media. Tune out the shouting and background noise that masquerade as meaningful commentary. Instead, wrestle, wrestle with those complex issues, be respectful of those with whom you disagree and always remember that despite all our differences there is that common bond that draws us together and binds us together as Americans.

And now, I come to my final piece of advice, perhaps the most important lesson that I’ll leave with you. So, listen up. Call your mother. Call your mother. Call your father. Call your grandparents, your aunts and uncles, your girlfriends, your boyfriends. And, I say that not just because I was in the cell phone business — although, I may be the only speaker who will actually ask you to turn your cell phone back on while I’m speaking — or because yesterday was Mother’s Day. I say that because if you’re really going to be honest with yourself you’ve got to acknowledge that you didn’t get here alone.

In a few minutes, this ceremony will be over. Before it is, think about what you accomplished — of the billions and billions of people in this earth, only the smallest fraction could ever even imagine sitting in the chairs that you’re sitting in today.

You may be scared about what happens next. So are your parents. You may not know where life’s going to take you. But right now, you know who helped get you here. That’s why after this ceremony you should find that special person and say, “thank you.” Tell them you love them. It will make them feel good; it will make you feel good as well.

So, class of 2006, as you leave the comfortable confines of this campus, never be afraid to fail. Remember that no one has a monopoly on truth, and never forget to call your mother.