Steward of the South

All things Southern — especially North Carolina and Wake Forest — have been historian Ed Hendricks’ focus on the faculty. 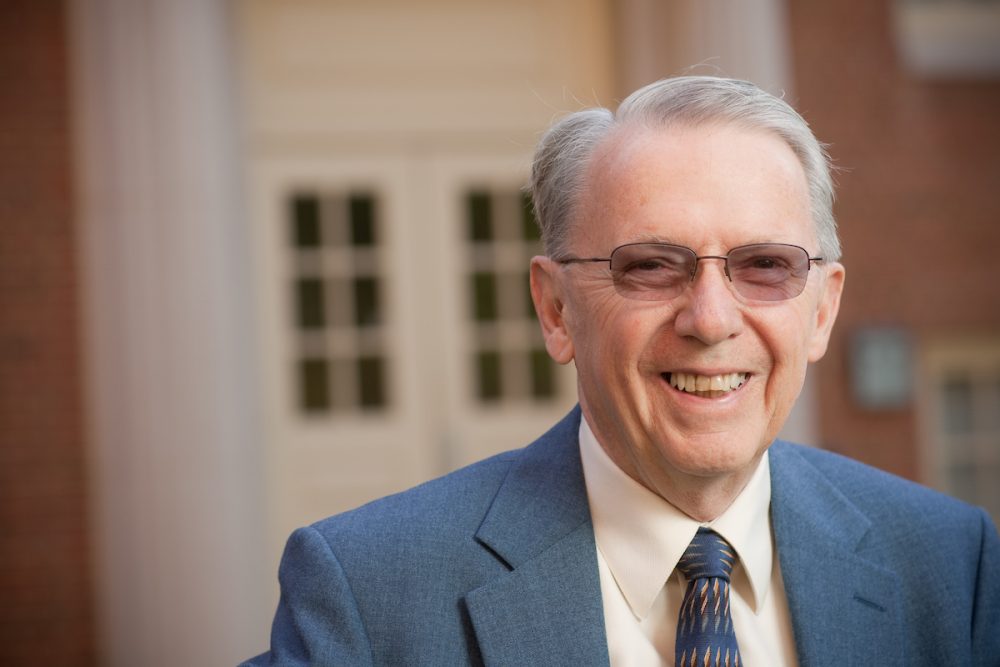 By David Fyten
Office of Creative Services
Published May 12, 2009

Most of what is essential about J. Edwin Hendricks, historian, can be gleaned from the last four digits of his home telephone number: 1834. Recognize those four digits? That’s right: the year Wake Forest was founded.

Although Hendricks says he chose the number only so he could remember it after moving 11 years ago, his friends and colleagues know better. The South, and North Carolina and Wake Forest in particular, are where he lives—intellectually, emotionally and spiritually, as well as physically.

Regional histories—of people like Joseph Winston, whose name was chosen in 1851 for the seat of the newly created Forsyth County; sites such as Historic Bethabara, Old Salem and the Reynolda estate; and events like the American Revolution in North Carolina—have been his focus, with idiosyncratic topics like 1950’s fallout shelters folded in for flavor.

And despite the fact that he retired from full-time status this spring with the second-longest tenure on the faculty behind Robert C. Beck, Hendricks will continue to be very much a part of the University and the historic sites and preservation organizations he serves as chronicler and steward of their heritages.

Raised in the Upcountry town of Pickens in the far northwest corner of South Carolina, Hendricks attended Furman University in Greenville, where he met Sue, his wife of more than 50 years. After completing an Army hitch and his master’s and doctoral degrees at the University of Virginia as a “Sputnik Ph.D” (referencing the speed with which he finished his graduate work thanks to the vast amounts of grant money the government invested in graduate education after the Soviet Union’s pioneering space satellite launch in 1957), he accepted his first and only faculty appointment as an early American specialist at Wake Forest College.

Given his specialty, perhaps it was inevitable that, sooner or later, he would focus on historic sites and their preservation. As it turned out, it was sooner. “In the fall of 1962 we had just completed building our first house on Macon Drive,” Hendricks recalls. “I was working on a book on liquor legislation in Virginia at the time, and for a change of pace I would take the boys [sons Jim and Chris—two of the three Hendricks children, along with daughter Lee] to Historic Bethabara, where archeologists had just begun preliminary work. We would go over to Bethabara and ‘investigate’ the ruins. It’s fair to say that my interest was aroused.”

The rest, as they say is history: Hendricks would go on to serve on the board of Historic Bethabara for 20 years and as consultant to other preservation organizations and historical societies locally and as far north as Pennsylvania. He was a member and chair of the Historic Districts Commission and worked with the early development of Reynolda House and the growth of Old Salem Inc., along with serving in a host of other civic, college and church capacities.

But one can never tell when their interest will be piqued in unexpected ways. After moving in 1998 from their longtime home on North Stratford Road to a house on Faculty Drive that had been built in the 1950s by College registrar Grady Patterson, the Hendrickses discovered in their back yard one of the few freestanding fallout shelters in Winston-Salem, built at the zenith of nuclear war hysteria in America. Predictably, Hendricks began to research the subject, eventually teaching several first-year seminars that encompassed analyses of the political, cultural and military climate of the time and included a visit to the shelter.

Hendricks traces his abiding appreciation for Wake Forest culture and history to a daily ritual in which he participated as a fledgling faculty member. “Every morning at ten, Forrest Clonts, our venerable department chair, shephered us from our desks where the circulation area in the library is now located over to the College cafeteria in Reynolda Hall for coffee,” he recalls. “There we would be joined by many of the other faculty and administrative legends of the time for conversation. I really came to appreciate the profound value that is placed on personal relationships here.”

Over the years, he has assembled three filing cabinets full of documents related to Wake Forest’s history and plans to write a concise, illustrated and readable institutional history in retirement. “As we have changed and diversified over the decades, it has become harder for us to fully understand and appreciate our heritage,” notes Hendricks, who wrote a similar history of the School of Law for its centennial celebration in 1994.

Hendricks, who recently finished a term as president of the Historical Society of North Carolina, looks forward to resuming work on his many unfinished research and writing projects. But like a good historian, he looks back as well. “Over the years, I was frequently asked what I teach at Wake Forest,” he says. “I regret that I resisted the temptation to respond, ‘Why, I teach Wake Forest students.’ They were always what the process was all about.”