Renaissance man Pete Weigl of biology becomes the first in his department to retire in 20 years. 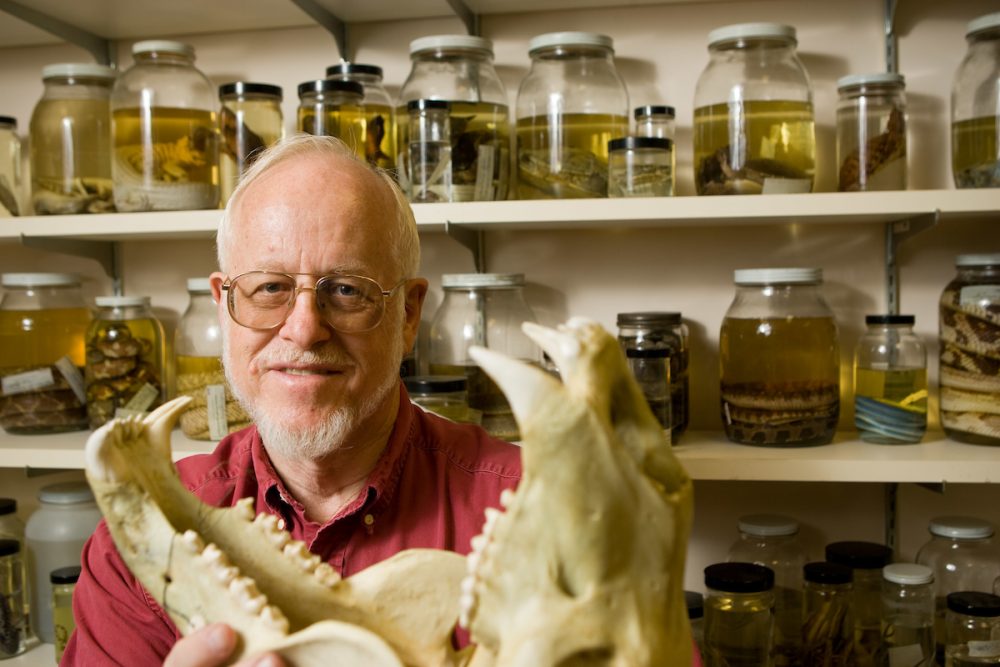 By David Fyten
Office of Creative Services
Published May 14, 2009

One would be tempted to say Pete Weigl is being put out to pasture if only he hadn’t spent so much time out in pastures already. Besides, it is impossible to imagine a guy as active and catholic in his interests as Weigl standing around like a ruminant in some sylvan setting.

No, there is research yet to complete and writing to be done — not to mention classical music to be sung, a fruit-and-nut orchard to be tended, ecotours to be led, and books to be read to gratify his self-acknowledged literary addiction. He might be outstanding in his field, but out standing in his field? Never.

Weigl, for four decades a member of Wake Forest’s biology faculty, will retire from teaching this summer. Biology is a department known for the longevity of its faculty, and he is only the third faculty member to retire in the last twenty years, following Mordecai J. “Mark” Jaffee in 1998 and Charles M. Allen (’39, MA ’41) in 1989.

He leaves behind on formal faculty status a triad of venerable colleagues — Jerry Esch, Ray Kuhn and Ron Dimock — all of whom came to Wake Forest about the same time he did and who are all in their late sixties or seventies today.

As an ecologist, Weigl has conducted research at and taken student and travel study groups to remote locations on five continents. The Amazon, the Andes, Africa, Asia … he’s explored it all — and that’s just the first letter of the alphabet. A passionate and politically active conservationist, he has been instrumental in the protection of North Carolina’s wilderness areas, from the long-leaf pine forests of the coastal plains to the “grassy balds” of the southern Appalachians.

During his career Weigl trained 27 masters and doctoral students. Most of his research has been externally supported, and in retirement he will continue to work on a government-funded study of an endangered mountain animal. In a time of hyper-specialization in academia, his pursuits in ecology, comparative physiology, animal behavior and biomechanics, and other fields have been extraordinarily eclectic.

“That is thought to be inefficient,” says the perceptive and always direct Weigl. “But you only get one life to try things so you might as well do what you enjoy.”

Weigl is something of a Renaissance man. Possessing a rich and resonant bass voice and command of the classical choral repertory, he has sung with several local choral groups, among them, the Wake Forest Chorale in its performance of Mendelssohn’s oratorio Elijah in May.

He tends a 38-acre wood lot and fruit and nut orchard and reads fiction voraciously; he completed most of the requirements for an English major at Williams College before earning his doctoral degree in biology at Duke and coming to Wake Forest in 1968.

Over the course of his career, Weigl has received four of Wake Forest’s five major faculty awards: the Reid-Doyle Prize (1972) and Jon Reinhardt Award (2003), both for excellence in teaching; the Award for Excellence in Advising (1992); and the Donald Schoonmaker Faculty Award for Community Service (1999).

One of his proudest recognitions came in June 2007 when he received the Joseph Grinnell Award from the American Society of Mammalogists for excellence in training student researchers.

Weigl will stay on in the biology department for the next two years as one of only three formally designated Research Professors on the Reynolda Campus. And he’ll continue to make time for student advising, if only on an informal basis. He will miss the teaching but knew it was time to let it go.

“I wanted to retire while I was still doing it well instead of just fading away,” he says. “I’ve been fortunate to have had the opportunity to teach a broad range of subjects and people, and it is the students I will miss the most. The research has been good, but it has a shelf life. What lasts are the people you have worked with; whose lives you have touched. I got to do a lot of things at the right time and with some good folks so Wake Forest has been a good place to be.”