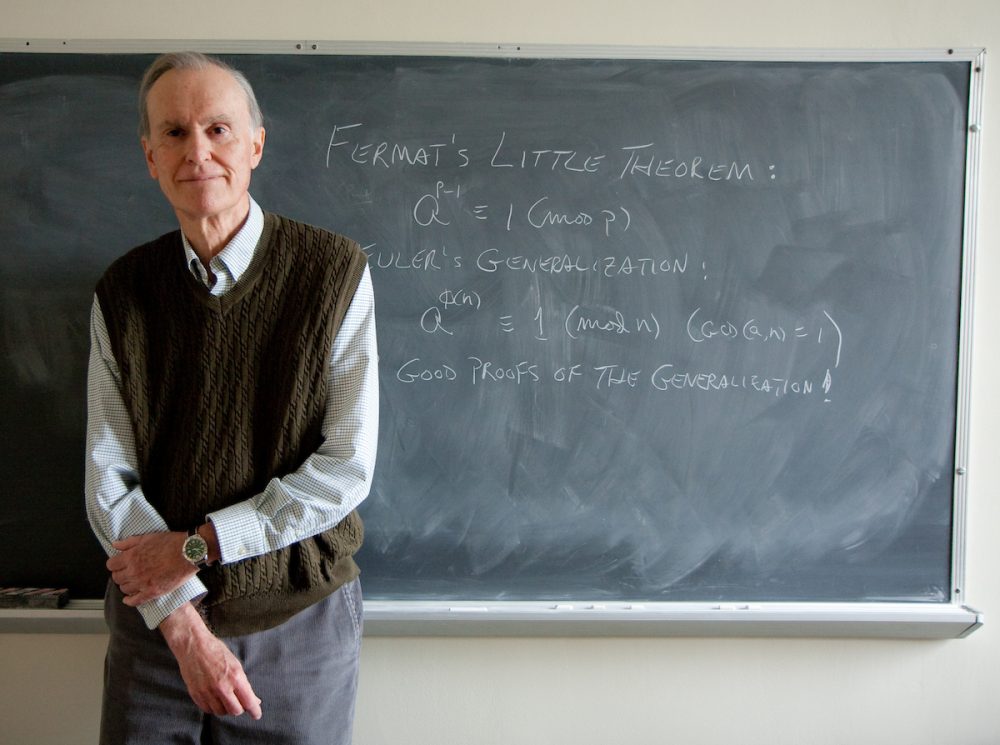 Ask Fred Howard most any historical baseball statistic, no matter how obscure, and he’s quick with the answer. What major league pinch hitter ended up in the Baseball Hall of Fame despite a career batting average of .000? That would be Walter Alston, who played in exactly one game with the St. Louis Cardinals, but who then went on to a successful career as manager of the Brooklyn/Los Angeles Dodgers for 20 years, which earned him entry into the Hall of Fame.

Howard, who is turning 70 the day before Wake Forest’s commencement exercises on May 18, is retiring as professor of mathematics after what surely ranks as a Hall of Fame-worthy career: 43 years teaching, all at Wake Forest. “I was a child prodigy,” he quips about his longevity. “The legendary (baseball player) Casey Stengel lamented growing old. He once said: ‘I will never make the mistake of being 70 again. “We can all understand that sentiment.”

Howard’s love of baseball began when he was growing up in Texas – his family lived in Fort Worth, El Paso and Abilene—and continued into adulthood, when he began collecting books on the history of baseball, mostly pre-1970.

His family — his father was a chemical engineer, his mother a Latin teacher and homemaker – moved to Cullman, Ala., when he was in high school. He went to college at Vanderbilt, intending to major in English or history, but after he made a 100 on his math final exam his freshman year, he decided to major in mathematics. “You find something you’re really good at, and go with that,” he explained.

He went on to earn a master’s in mathematics from Vanderbilt and then, in 1966, his Ph.D. from Duke, where he met his future wife, Gail, who was a graduate student in English. He began teaching at Wake Forest the same year. He figured he would stay about 10 years and move on. “That seemed about the right amount of time,” he said. “But I liked it so much and fit in so well that I decided to stay.” The only place he moved was closer to campus; he and Gail built a home on Faculty Drive about 25 years ago.

He joined a department that was finishing a transition from Old Campus stalwarts, such as Hubert Jones, “Pop” Carroll, Kenneth Raynor, and Roland Gay, to the next generation. Under the leadership of Ivey Gentry, a host of newcomers had joined the department in the early to mid-1960s who, like Howard, would go on to have long careers at Wake Forest: Ben Seelbinder, Marcellus Waddill, and Gaylord and Graham May. Howard’s retirement leaves only Gaylord May still teaching from that group.

“It was a small enough department that we all knew each other as friends and colleagues and got along and worked well together toward the same goal, to make the department as good as it could be,” Howard said. He still plays tennis and bridge with colleagues in math and from other departments; friends say he’s a fierce competitor on the tennis court and around the bridge table.

Professor Emeritus of Mathematics John Baxley joined the faculty two years after Howard, and the two shared an office in Reynolda Hall before the math department moved to what is now Manchester Hall in 1969. “Fred has always been a constant source of encouragement and inspiration,” said Baxley, who retired in 2004. “He was unflagging in his dedication to his students and to his research. I always knew he was a good teacher, and I got to hear it first hand from my son, Paul (’91), when he was in one of Fred’s classes. I saw it for myself when he was kind enough to let me make up the deficiency of never having a number theory course by attending his class one semester.”

Tammy Pausch Mason (’81) took every math course Howard taught during her four years as an undergraduate and credits him with her decision to major in math and pursue a career in education. “He was a gifted and caring teacher, who knew his stuff and knew how to convey understanding of each concept to his students,” said Mason, who is now an instructional technology specialist with the Lynchburg City Schools in Lynchburg, Va. “I would often go talk with him about my classes or other issues, and he would always listen with great care and provide meaningful feedback.”

Mark Ginn (’88, MA ’90), chair and associate professor of mathematics at Appalachian State University, had Howard for several classes as an undergraduate and a graduate student. “I was heavily influenced by him. He was a definite role model in his professionalism. He had a real knack of giving students just enough help, but not too much, so that you could learn to solve problems on your own.”

Howard’s soft-spoken, mild-mannered, professorial nature belies a dry sense of humor, often played out anonymously over the years in the math department offices. There was the time in the early ’90s during an arduous search for a new faculty member when the search committee received a phenomenal application from one “I.M.A. Plushbottom” who held the BA, BS, MA, MS, MBA, MD and Ph.D. from “PU.” It was accompanied by a recommendation letter from his thesis adviser, who allowed that Plushbottom was a terrible teacher – who would fit in perfectly at Wake Forest. The letters – and a photograph of Plushbottom that bore an uncanny resemblance to Howard – eased the tension of the search.

Then there was time in the early 1980s when esteemed biology professor Charles Allen (’39, MA ’41), heading up a committee on space allocations, recommended that the math department move to Wingate Hall, because its space requirements were “spartan.” Soon a sign appeared in the math department office welcoming visitors to “Sparta.”

The sign also had an arrow pointing toward Tribble Hall with the notation “Athens, x meters.” Another arrow pointed toward Wait Chapel — “Jerusalem, y meters.” And one final arrow pointed downstairs to where the Babcock Graduate School of Management then had its offices – “Hades, z meters.” Howard never admitted responsibility, but it bore all the traits of his calm demeanor and sense of humor.

Howard was the graduate student adviser for 30 years, and oversaw the thesis research of more than 20 graduate students. Ask him about a student who completed a thesis on Fermat’s Little Theorem 15 years ago, and he immediately pulls a copy off a bookshelf in his neat second floor office in Manchester Hall overlooking Manchester Plaza.

“I will miss interacting with students,” says Howard, who will still teach one course next fall. “I’ve enjoyed helping students, being a friend and mentor, as well as their teacher. And I’ve enjoyed being an integral part of the math department.”