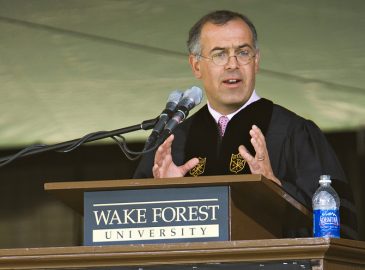 David Brooks, a columnist for The New York Times and a regular analyst on the “NewsHour with Jim Lehrer” and National Public Radio’s “All Things Considered,” urged graduates at Wake Forest University’s commencement address to realize their place in the grand sweep of history.

Afterward, he received an honorary doctor of humane letters degree.

In a speech titled “The Hidden River of Knowledge,” Brooks encouraged the graduates to see their lives as connected to all who have come before and to generations yet to be born.

“We inherit, starting even before we are born, a great river of knowledge, a great flow from many ages and many sources,” he said.

Brooks noted that the truly great people he has met in his journalism career “talk to dead people” because they want to feel a connection to where they have come from and what they will leave behind.

The address blended Brooks’ characteristic humor with references to current scientific research in the style of his two books, “Bobos in Paradise: The New Upper Class and How They Got There” and “On Paradise Drive: How We Live Now (And Always Have) in the Future Tense.” He poked fun at what he terms “Ubermoms,” who from the womb groom their children for perfection, while noting that brain research underscores how much modern humans owe the Ice Age hunters and gatherers.

To the standard advice offered at commencements – spend a year abroad, carefully consider your marriage partner, devote yourself to your kids – Brooks added a novel suggestion:

“Create a posse of dead people,” he advised. “Create an entourage of heroes. Put their pictures on your wall, and keep them in your mind.”

“They will remind you of your place in the hidden river of wisdom. … They’ll remind you that your many blessings don’t come from you but from those who came before you.”