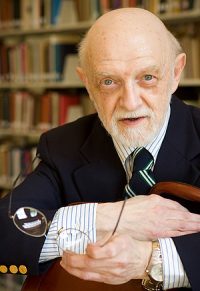 The route from the mountain town of Hendersonville in western North Carolina to Winston-Salem was serpentine in the late 1950s, but it was a veritable crow’s flight compared to the figurative route that Michael Sinclair (’63) took from there to here.

It seems fitting, then, that the primary destination of the journeys of the mind on which the history professor took so many students over the years would be, for many Americans, the world’s most inscrutable and inaccessible: China.

Sinclair, who has retired from teaching after spending nearly four decades on the faculty, was the first full-time faculty member in the East Asian Studies program and for many years the history department’s only specialist in China and Japan. As one who participated in faculty searches and worked with those who came, he was instrumental in cultivating the increase in faculty and interest in East Asia at the University over the years.

Sinclair wanted to go to college after graduating from Hendersonville High in 1958, but he didn’t have enough money. So he enlisted in the Air Force. After attending cryptology school, he was assigned to the National Security Agency and spent 26 months in the Philippines, setting aside $4 for discretionary spending every payday and banking the rest.

“Needless to say, I spent a lot of my off-duty time in the [base] library,” he says. “I also worked as an unpaid staff member at the local Armed Forces Radio and Television Service affiliate. I started as a disc jockey and worked my way up to sports director, doing the evening sports broadcast, a Saturday special and play-by-play of football games.” While on duty, a major focus of his work was China.

Following his discharge in 1960, Sinclair enrolled at Wake Forest, but money was still in short supply, so he accelerated his studies to graduate in three years. He enrolled at Stanford University on a Woodrow Wilson Fellowship to study European history, but in his second year there, an opportunity cropped up that would sharply alter the course of his career.

“To counteract overspecialization [in academe] and encourage greater expertise in East Asia, the Ford Foundation developed, with Stanford, a double doctorate program in either U.S. or European history, and Asian history — either Japan or China,” he says. “I chose China, as so much more concentration, comparatively speaking, was being given to Japan. It was a wonderful opportunity, because the best history, as has been said, is comparative history.”

Sinclair, whose Stanford program included four years of formal study of the exceedingly difficult Chinese language, completed his doctorate after returning to Wake Forest in 1968. Besides his teaching and scholarship, he did consulting and translating with local businesses and worked with the public school system in developing East Asian programs.

Sinclair, who retired from teaching last year after being diagnosed with cardiac problems, recalls fondly the many students in whose lives he made a difference over the years. He still meets with students and continues his research, hoping to find the time to do a lot of the writing he put off due to other commitments.