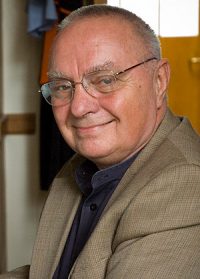 When Professor of Religion John Collins arrived on the Wake Forest campus in 1970, he was the only faculty member teaching a religious tradition other than Christianity. Today, students benefit from the knowledge of faculty members who are experts in Buddhism, Hinduism, Islam and in Near East studies. Professors with Australian, Asian and African ethnicity complement what Collins deems a beautifully diverse department — one that Collins himself is largely responsible for fostering.

“My function has been to make the religion department more inclusive and diverse. Thirty-seven years ago, I was the only person teaching anything other than Christianity. Today, Wake Forest is a global university, and that was my mission when I came here.”

Says Boyd, “He has mentored young faculty who have not always felt comfortable at Wake Forest, and therefore, he has borne a great deal of responsibility for the kind of department we have become. It hasn’t always been easy, both inside the department and within the University, for us to grow this way. We are very grateful for his contribution.”

A native of Knoxville, Tenn., Collins completed undergraduate and graduate school studies in physics at the University of Tennessee. “I always wanted to be a teacher but didn’t want to teach physics,” Collins says of his path from science to religion. “I grew up in a Southern Baptist home with wonderful instruction in religion, so it was natural that I’d be drawn to religion. After enrolling in a philosophy class in Eastern traditions because it was the only class in the whole school that had anything to do with religion, I knew it was exactly where I needed to be.”

Collins’ teaching style has focused on meeting the needs of each individual student and adapting his techniques to the topic and individuals at hand. He’s enlightened hundreds of students not by lecturing about ritual and communion but by donning a Screamin’ Demons t-shirt. “We have a community here at Wake Forest and we should identify ourselves as a community and think of how good we feel when we’re all yelling for the same thing. In addition to the t-shirt, I would project the University seal on the screen and discuss its meaning to make sure my students understood what Wake Forest is all about.”

Over the years, computers, the Internet, e-mail and blogs have brought people and resources to Wake Forest from the other side of the world — bringing to students and professors alike data and details that would have been onerous, if not impossible, to find when Collins first started teaching. “Research used to be difficult, but now you can find a group of people who are discussing your specific interest with no problem, and this is one of the best things Wake Forest has ever done — giving us easy access to information.”

As the faculty, curriculum and access to information have changed, the students have changed too. “The students who came to Wake Forest in the ’70s were liberal students — not liberal in terms of world understanding, but liberal in terms of the Baptist world. When I first arrived, my classes on Buddhism, Hinduism and Taoism would fill up and I’d have to teach two sections. Our culture today, however, is much more pragmatic and interested in the bottom line. One would expect that students coming to Wake Forest would have global consciousness, but most don’t. They see themselves as Republican, conservative, liberal, Baptist or Catholic, but they don’t understand themselves as citizens of the world with a Pro Humanitateconsciousness. Wake Forest is the perfect place for them to develop that broader sense of who they are and what this wonderful human existence is all about.”

Though Collins says he’s excited about his new adventure and looking forward to days without schedules and definite plans, he has mixed emotions about retiring. “I hit the lottery when it came to a place to work and grow,” he says, “and I’m going to miss Wake Forest.”