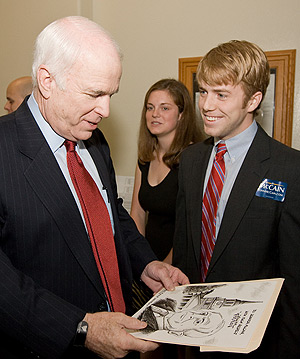 Cartoonist William Warren presents a cartoon he drew of Sen. John McCain when McCain visited campus in May.

He received $10,000 and the Charles M. Schulz Award for his comic strip, “Lummox,” printed weekly in theOG&B. The comic strip chronicles the adventures of Lummox and Goodrich, two freshman roommates.

Warren began drawing editorial cartoons for the OG&B during his freshman year and started “Lummox” in 2006. Last year he won the John Locher Award from the Association of American Editorial Cartoonists.

A native of Atlanta, Warren majored in political science with a minor in studio art. After graduating, he will be joining a Washington, D.C.-area, think tank, Americans for Limited Government, to write and draw cartoons for the group’s publications.