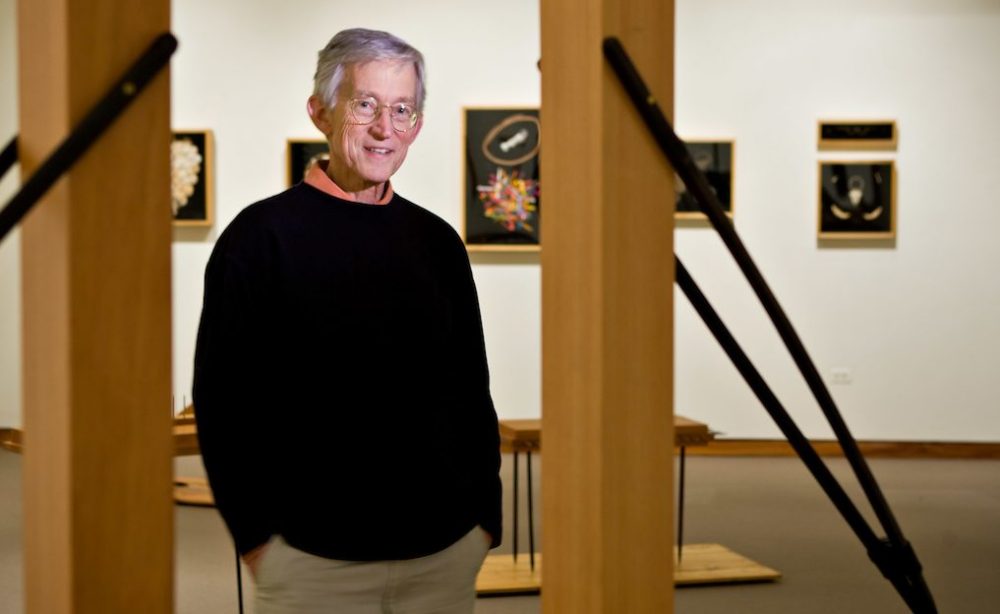 In the early seventies, a young art historian in Boston named Robert H. Knott and his wife, Elen, bought a cottage in Lubec, Maine, the easternmost town in the continental United States. Situated on Passamaquoddy Bay, an inlet of the Bay of Fundy, and featuring the world’s highest tides and spectacular views of the New Brunswick coast, migrating whales and warren of islands (including Campobello, the summer domicile of Franklin D. Roosevelt), Lubec was home to a prosperous fishing industry that harvested, smoked and canned millions of tons of herring from the Gulf Stream-fed waters of the Atlantic Continental Shelf each year.

But as overfishing depleted the fishing grounds over time, the industry waned. Today, Lubec contains little more than ramshackle remnants of harborfront fishing shacks and canneries and the quaint homes of seasonal residents like the Knotts.

A few years after arriving in Maine, Knott migrated again to a new setting that would manifest the reverse of Lubec’s growth arc. In 1975, he accepted an offer to join the nascent art department at Wake Forest. At the time, the University did not offer an art major. Its two full-time art instructors were historians, and its studio program was essentially an extracurricular activity quartered on the sixth floor of the library. But President James Ralph Scales and Provost Edwin G. Wilson (’43) had a grand vision for the arts at the school. Construction had begun on a comprehensive facility for the fine arts that would be named after Scales, and Wilson had spearheaded the securing of grants from the National Endowment for the Arts and the Rockefeller Foundation to hire a faculty and bring in visiting artists in residence.

A year after his arrival, Knott was appointed chair and went about the task of building a faculty. By 1980, when he vacated the post, the department was up to eight faculty members and a major program that included studio as well as history was in place. Today, the department features close to 15 full-time faculty members and a host of part-time artists and instructors and offers one of Wake Forest’s most popular undergraduate programs, with approximately 70 majors and a similar number of minors.

Bob Knott is retiring this month — the first and so far only faculty member to retire from the art department — and if he takes any credit for the flourishing of art at Wake Forest, it is the culture of collegiality he consciously cultivated in his early hires and that has continued through the years. From historians like Margaret Supplee Smith and Harry Titus, who were among his very first appointments; through printmakers, sculptors and painters like David Faber, David Finn and Page Laughlin, who were vanguards of a solid second wave; and on down to the addition of nationally prominent scholars and critics like David Lubin and Peter Brunette in recent years; the art faculty has sounded a tone of creativity and collaboration that resonates through the lower wing of the Scales Fine Arts Center and across campus.

By virtue of his background and demeanor, it would be easy to assume that Knott is a New Englander. But actually, he’s a Southerner, born and raised in Memphis. After graduating from Stanford, he earned a master’s degree in art history at the University of Illinois (where he met Elen) and a doctorate at the University of Pennsylvania in early 20th-century art, and then took his first (and only other) academic job at the Boston campus of the University of Massachusetts.

It was the opportunity to be part of shaping Wake Forest’s new program that convinced him to migrate south. “One of my major concerns when I arrived was that the plan [for expansion of the department] was weighted much more heavily toward history than toward studio,” recalls Knott, a lithe, bespectacled fellow with an even and decorous temperament. “I pushed hard for equal weighting, the result being a much more balanced and thriving department.”

Knott looked for prospective faculty who were collegial as well as talented. “Students are perceptive enough to tune into that,” he says. “The fact that a lot of our early hires are still here is testimony to the benefit of that approach. We’ve got great colleagues here.”

One of Knott’s most rewarding efforts has been his leadership of the Student Union Art Collection quadrennial acquisition trip. Every four years since the sixties, a coterie of students, armed with a substantial budget, has traveled to New York City to buy works by promising but not-yet-well-established artists. As a result of their informed choices, the collection today comprises works by some of the most luminous names in contemporary art that are worth many times what they were bought for. “It is an invaluable learning opportunity for the students, with the bonus of building a wonderful and relevant collection of modern art for the University,” says Knott, who prior to each trip taught a course on the aesthetic and business aspects of the acquisition process for the participants. “It really sets us apart from our peer institutions.”

The acquisition trip is but one facet of Knott’s efforts at helping build a solid network of contacts for Wake Forest among the galleries, museums, auction houses, agencies and other constituencies of New York’s art community. For three years, he team-taught with Gordon E. McCray of the Calloway School of Business and Accountancy a seminar on “Management and the Visual Arts.” Limited to eight art majors and eight business majors, the seminar focuses on the interrelationships between the artist and the various commercial aspects of art. “We’ve already placed a number of our graduates in jobs in New York through the seminar,” Knott reports. “In general, we have a lot of supportive alumni who are prominent in New York [art circles] and are willing contacts for us and our students.”

An accomplished studio artist as well as historian, Knott draws much of his creative inspiration from the demise of Maine’s fishing industry, fashioning sculptures out of flotsam and jetsam — wood planks, lobster tags, bits of rope, posts from which herring was hung, and so forth — he gathers from the shore in and around Lubec during the summer. “I like that it’s had another life,” he says of his found material.

A skilled photographer, he is especially known for the unique photographic interpretation of Venice — colorful hanging laundry — that he created while serving as Casa Artom director in 2002. “I don’t really consider myself a photographer,” he says. “I use the camera as an extension of my eye. I’m always looking for the unusual.” A retrospective of his work was exhibited in Wake Forest’s art gallery this past semester.

With two daughters and four grandchildren in close proximity to Winston-Salem, the Knotts aren’t moving anywhere permanently, although they are looking forward to finally having the chance to experience Maine’s colorful autumns. In fall, as it comes to fruition, the life cycle assumes a special glow.