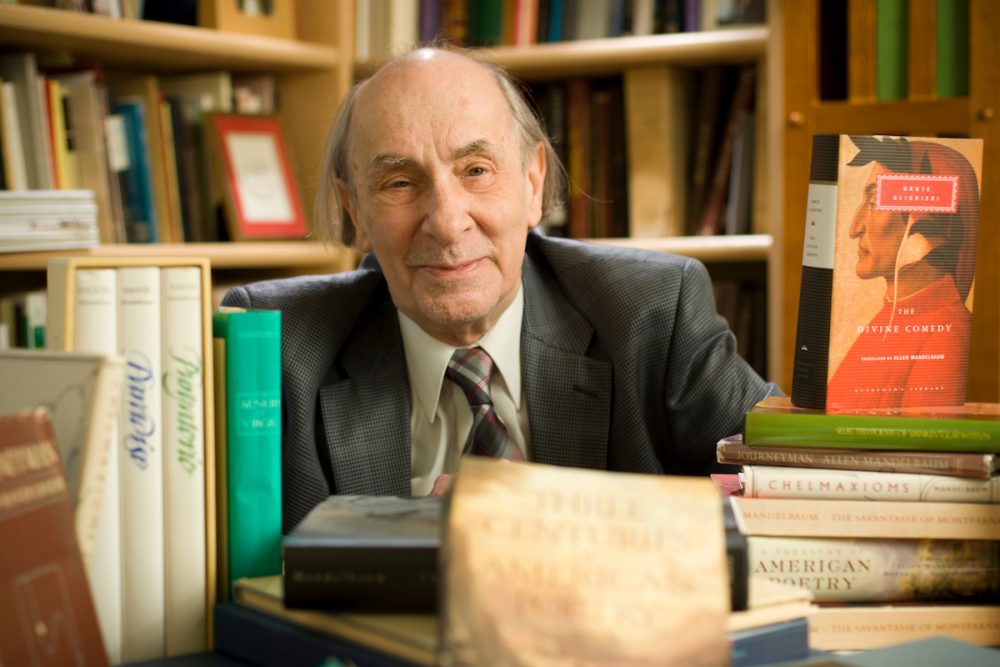 The Wait Chapel tower might be built of red brick, but in its brightness and value to the intellectual life of Wake Forest, it was for many years decidedly ivory. There, in a warren of offices just below its carillon belfry, were five of the finest minds ever to have graced the Reynolda Campus. Germaine Brée, James Ralph Scales, Robert Helm, Al Martin and Allen Mandelbaum plied their gifts as distinguished professors, synthesizing thoughts and connecting dots as intellectuals without portfolio. Their lofty perch seemed to symbolize their exalted statures and panoramic views of the human experience as only the humanities can afford.

Now, with the observance and celebration of Mandelbaum’s retirement this spring, all are deceased or retired, and we’re not likely to see their kind again any time soon. For many years, the venerable breed of the cross-disciplinary intellectual has been in decline with the rise of specialization in scholarship. Mandelbaum’s departure nudges the species that much closer to the brink of extinction.

Friends and colleagues honored the W.R. Kenan Jr. Professor of Humanities at a dinner in his honor on May 5. In recognition of his vast scholarly output and the esteem in which he is held internationally, his papers will be kept in a new Allen Mandelbaum Reading Room in the Z. Smith Reynolds Library.

Few if any faculty members in Wake Forest’s history have achieved the kind of worldwide status that Mandelbaum has in his field. His verse translations of Dante’s Divine Comedy are widely regarded as the finest ever, and they are nearly equaled by his powerful, poetic translations of Ovid’s Metamorphoses, Homer’s Odyssey and Virgil’s Aeneid, which won the National Book Award. The recipient of numerous honorary degrees and other awards, Mandelbaum is especially revered in Italy, which has bestowed upon him its highest award, the Presidential Cross of the Order of the Star of Italian Solidarity, along with several other citations, including, as the only American ever to receive it, the Gold Medal of Honor of Florence, Italy. A gifted poet in his own right, he has published five volumes of verse, with another in preparation.

“Allen has about him the aura of an Old World scholar that one would have to go back to before World War II to find,” says Edwin G. Wilson (’43), professor of English and Provost Emeritus who was instrumental in luring Mandelbaum from the Graduate Center of the City University of New York to Wake Forest to succeed Brée as Kenan Professor in 1989. “He reminds me of [thinkers like] Isaiah Berlin, deeply conversant in history, literature, languages, culture and religion; a person who has embraced everything worth knowing.”

A devout and learned Jew, Mandelbaum is also highly knowledgeable of and drawn to Christianity, bridging the two faith traditions in his life and writing. “In the Divine Comedy, Dante takes the reader from Hell [Inferno] to Heaven [Paradiso], through Purgatory [Purgatorio],” notes Lily Saade, who has served as Mandelbaum’s assistant since 1990. “A scholar of this great work could not travel the way of Dante without embracing the hope of Christianity — of man finally reaching God.”

Those closest to Mandebaum acknowledge the apparent contradictions in his personality. Whereas many think of him as aloof, many others regard him as generous and caring. At the dinner in May, Wake Forest Professor of English James Hans spoke of the encouragement and support Mandelbaum gave him early in his career and down through the years, despite having taught him in only one course as a visiting professor at the graduate school Hans attended.

“In his translation of the Aeneid, Allen powerfully renders a fundamental human question when a character named Nisus asks his friend before they engage in a battle they will lose: ‘Euryalus, is it the gods who put this fire in our minds, or is it that each man’s relentless longing becomes a god to him,’” Hans told the dinner assembly. “The one thing we know for certain is that Allen’s fire burns more brightly than anyone else’s, and for that all of us in the Wake Forest community should be grateful.”