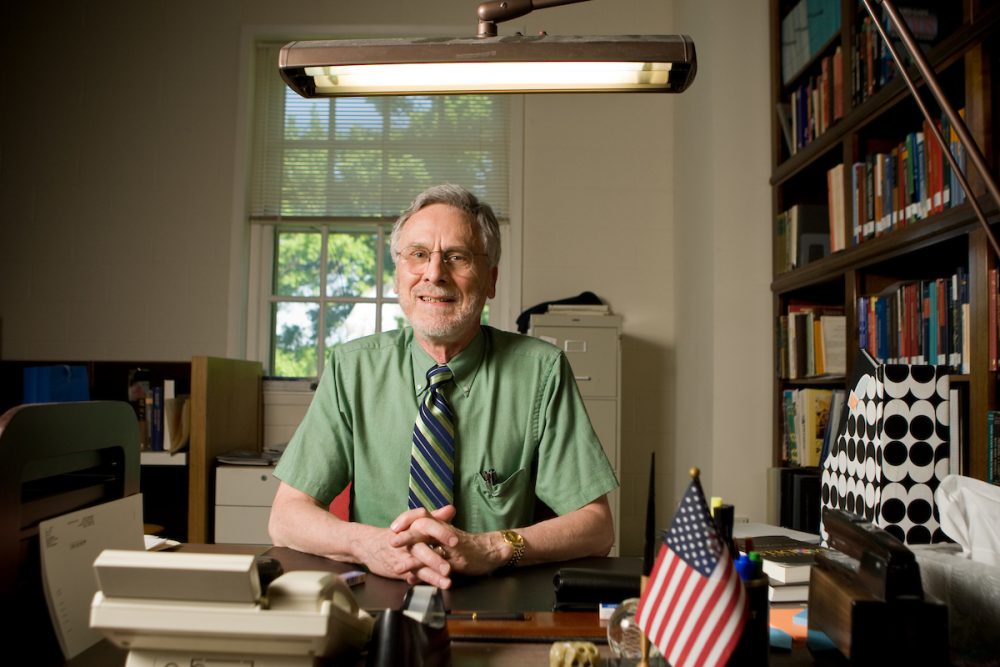 Bill Kerr raised the bar for physics students and his department

Over the course of his long teaching career, Professor of Physics W.C. “Bill” Kerr estimates that he must have taught Maxwell’s equations to several hundred students. And he hopes that at least a few of them remembered the equations long after they left his class. If not, they will surely remember the day their professor — whose buttoned-downed, reserved demeanor belies his witty sense of humor — pulled what he calls his “act.”

“I have a T-shirt with Maxwell’s equations on it, and when we got to that in the class, I would wear the T-shirt to class under my dress shirt and tie,” he says. “About halfway through the lecture, I would do a ‘strip tease’ by removing my shirt and tie to display the T-shirt. I wanted to do something dramatic to emphasize the scientific synthesis they had just seen: all of classical electricity, magnetism and optics described by four equations that fit on a T-shirt. I hope some of them remember it.”

Kerr is hanging up his T-shirt after teaching at Wake Forest for 38 years. If not his T-shirt, he’ll undoubtedly be remembered for his immeasurable contributions to the stellar reputation of the physics department and to the lives of the students who have come through the department.

“Bill Kerr changed my life through his accessibility, patience and unflagging good nature,” said one of his former students, Kathy Meiburg Whatley (’77, P ’11), who was recently named provost of Berry College in Georgia. “He was my finest role model, and I became determined to someday be the next generation’s Dr. Kerr. Over the years I came to realize what a truly dedicated and amazing professor he is. He is a world-class scientist, who always had time for a question from a lowly sophomore or a fellow professor.”

His influence has been felt by colleagues as well. “He has always imposed high standards on himself, and has helped maintain high standards for the physics program at Wake Forest throughout his career,” said Professor and Chair of Physics Keith Bonin.

Kerr will be moving out of his third-floor office in Olin Physical Laboratory this summer, but he will still have a desk in the building and plans to continue his research. He says he’ll miss the regular interaction with students. “We have always had good students,” he says. “And the growth of the department over the last 15 years has been quite exciting, especially after we moved into this building (in 1989). It gave us opportunities to do more things.”

A native of the small town of Carrollton, Ohio, Kerr majored in physics and mathematics at The College of Wooster, where he met his future wife, Sandria, during freshman orientation. He won a Woodrow Wilson Graduate Fellowship and used it to attend Cornell University, where he obtained his Ph.D. in theoretical physics. He had post-doctoral positions as a research assistant at the Institute for Theoretical Physics, Chalmers University of Technology in Goteborg, Sweden, and at the Argonne National Laboratory outside Chicago.

While attending a meeting of the American Physical Society in Washington, D.C., he met Tommy Turner, then chair of Wake Forest’s physics department, and professor Howard Shields. Turner eventually offered him a three-year appointment, and in 1970 he became the sixth member of the physics faculty, which also included Bob Brehme, Jack Williams and Ysband Haven. (Shields, Brehme and Williams all enjoyed long careers at Wake Forest.) The department shared space with the chemistry department in Salem Hall.

That three-year appointment turned into a lifetime. Since then the department has grown to fifteen faculty members and moved into new quarters in Olin Physical Laboratory. Kerr was one of the first faculty members in the department, along with Professor of Physics Natalie Holzwarth and former department chair Rick Matthews, now associate provost for information systems, to push for high-performance computing, vital for cutting-edge research. Their first attempt to get external funding failed, but the University agreed to spend the promised matching funds to buy a computer anyway. That support was the seed from which the department’s current extensive effort in high-performance computing grew.

Kerr’s own research has focused on theoretical solid state and statistical physics. “I was pretty free to pursue whatever I wanted to pursue,” he says. “All the (department) chairmen have been very supportive, and we all get along very well in the department.”

Kerr and his wife, Sandria, have lived on Faculty Drive since 1978. Sandria Kerr, who taught mathematics and then computer science at Winston-Salem State University, also retired this summer. They are planning to travel more-a trip to Alaska is already planned for August-and to spend more time with their two daughters, who both live in New Jersey, and four grandchildren.

Whatley still recalls a class dinner at the Kerrs’ home and the influence that Sandria Kerr, as well as Bill Kerr, had on her life. “Mrs. Dr. Kerr, as we called her, was the first female scientist role model I had, and proved that one could have a career as a faculty member and sustain a family,” she said.

Kerr is a regular at Winston-Salem Symphony and Piedmont Opera productions and hopes to resume playing the piano now that he’s retiring. He also hopes to still get together with his lunch gang in the Pit in Reynolda Hall, friends from other department drawn together partly by their love of music-David Levy from music, Ellen Kirkman from math, Pete Weigl from biology, and retired communication professor Jill McMillan, among others. His love of desserts is legendary, friends say. Kerr offers that the Pit’s all-you-can eat plan is a good deal, although the serious scientist in him worries about the wisdom of the “all-you-can-eat” part, before his playful nature kicks in: “I always have dessert.”